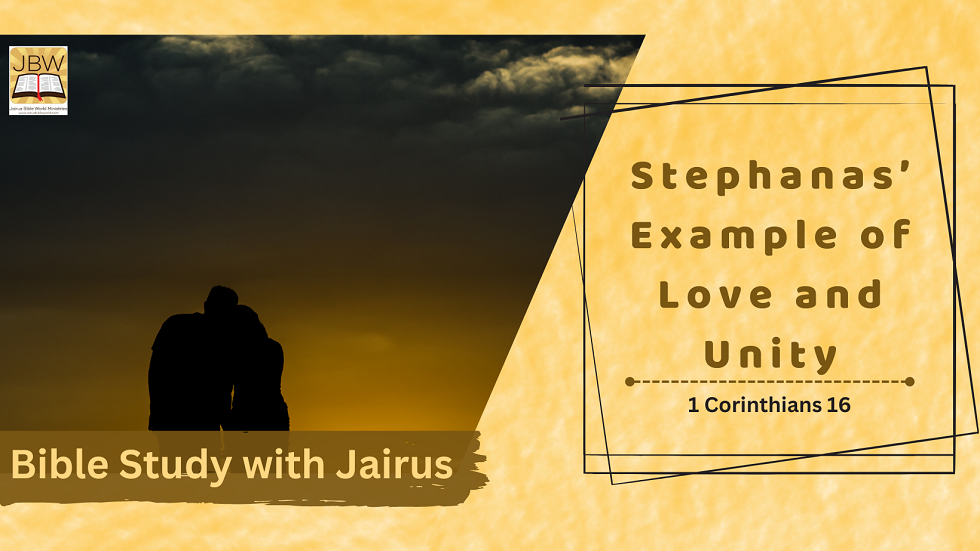 Stephanas’ Example of Love and Unity

Why did Apollos refuse to visit now, and instead would visit later?

In 1 Corinthians 16, the Holy Spirit highlighted several verses, including verse 12: “Now concerning our brother Apollos, I strongly urged him to visit you with the other brothers, but it was not at all his will to come now. He will come when he has opportunity.”[1]

Why didn’t Apollos want to visit the Corinthians, even though Paul urged him on multiple occasions? Why would he come when he had the opportunity?

First, let’s find out more about Apollos. Acts 18:24-25 tells us that Apollos was an eloquent man, who told many people about God, but knew only about John’s baptism. He came to Ephesus, and Priscilla and Aquila explained the way of God to him in more detail (18:26). What is the “way of God”? Is it referring to the baptism of the Holy Spirit as opposed to the baptism of John? We don’t know for sure. Let’s look at this verse:

Acts 18:24-28 says, “Now a Jew named Apollos, a native of Alexandria, came to Ephesus. He was an eloquent man, competent in the Scriptures. He had been instructed in the way of the Lord. And being fervent in spirit, he spoke and taught accurately the things concerning Jesus, though he knew only the baptism of John. He began to speak boldly in the synagogue, but when Priscilla and Aquila heard him, they took him aside and explained to him the way of God more accurately. And when he wished to cross to Achaia, the brothers encouraged him and wrote to the disciples to welcome him. When he arrived, he greatly helped those who through grace had believed, for he powerfully refuted the Jews in public, showing by the Scriptures that the Christ was Jesus.”

First Corinthians 1:12 says, “What I mean is that each one of you says, ‘I follow Paul,’ or ‘I follow Apollos,’ or ‘I follow Cephas,’ or ‘I follow Christ.’” This verse reveals that there was a division in the Corinthian church, and this division may have had something to do with the different teachings of Apollos. Perhaps Apollos did not understand the baptism of the Holy Spirit, or perhaps the “way of God” explained by Priscilla and Aquila did not include the baptism of the Holy Spirit. If the teaching about the Holy Spirit was included in Priscilla and Aquila’s explanation, perhaps Apollos couldn’t accept this teaching. In any case, judging from Apollos’ work in Corinth, it seems that some people may have been influenced by him to oppose spiritual gifts and tongues.

Let’s look at 1 Corinthians 3:4-9 again. “For when one says, ‘I follow Paul,’ and another, ‘I follow Apollos,’ are you not being merely human? What then is Apollos? What is Paul? Servants through whom you believed, as the Lord assigned to each. I planted, Apollos watered, but God gave the growth. So neither he who plants nor he who waters is anything, but only God who gives the growth. He who plants and he who waters are one, and each will receive his wages according to his labor. For we are God’s fellow workers. You are God’s field, God’s building.”

From these verses, we can guess that Apollos did not accept speaking in tongues or receive the baptism of the Holy Spirit. His different teachings may have had a certain amount of influence on the division in the Corinthian church. But perhaps he was making an innocent error in his teaching. That’s why Paul was trying to persuade him. Maybe after Priscilla and Aquila brought up the topic, Paul continued to mention it to Apollos, trying to persuade him to receive the baptism of the Holy Spirit. Even though Apollos did not accept Paul’s point of view, Paul still pursued love and unity, which is the theme of 1 Corinthians.

First Corinthians is not saying that we can’t eat meat or speak in tongues, or that women can’t preach. Rather, 1 Corinthians is about love and unity. Paul gives up his right to eat meat for the sake of love and unity. But he is not against eating meat. Paul gives up speaking in tongues in meetings for the sake of love and unity, but he himself is not against speaking in tongues. He even speaks in tongues more than anyone in Corinth (1 Corinthians 14:18). Likewise, Apollos and Paul may have held different views on the truth, but they did not have a falling out. Instead, Paul had confidence in Apollos and was sure that he would eventually be convinced to believe the truth.

Although Paul and Apollos may have had different understandings of the truth about the baptism of the Holy Spirit, he did not let this affect his relationship with Apollos. On the contrary, Paul praised Apollos as the one who watered the seeds he planted (1 Corinthians 3:6). He acknowledged that God gave the growth. Paul not only praised Apollos but also criticized the Corinthian believers for excessively exalting or condemning leaders. Whether it was Priscilla, Aquila, or Paul, all of them were trying their best to help Apollos.

1 Corinthians’ ending is filled with sunshine and hope

The Holy Spirit also highlighted 1 Corinthians 16:15-18: “Now I urge you, brothers—you know that the household of Stephanas were the first converts in Achaia, and that they have devoted themselves to the service of the saints— be subject to such as these, and to every fellow worker and laborer. I rejoice at the coming of Stephanas and Fortunatus and Achaicus, because they have made up for your absence, for they refreshed my spirit as well as yours. Give recognition to such people.”

In these verses, Paul highly praised a man named Stephanas, who was certainly not the martyr Stephen. This Stephanas was one of Paul’s first converts in Achaia. Paul says in Corinthians 1:16, “I did baptize also the household of Stephanas. Beyond that, I do not know whether I baptized anyone else.” Paul baptized Stephanas himself, which indicates that he was Paul’s first convert.

As we’ve mentioned earlier in Acts 18:27, when Apollos wanted to go to Achaia, the brothers encouraged him and wrote to the disciples to welcome him. He helped a lot of people when he got there. So looking at this verse, perhaps Apollos could take credit for the work in Achaia, even Stephanas’s salvation. This is a practical example of Paul planting and Apollos watering.

In verse 19 of this chapter, Paul mentioned that Priscilla and Aquila greeted the believers in Corinth. Perhaps, by this time, Priscilla and Aquila had already returned to Rome. In verse 20, Paul said that all the brothers greeted the believers in the Corinthian church. Verse 21 says that Paul wrote this greeting with his own hand. Verse 22 says, “If anyone has no love for the Lord, let him be accursed. Our Lord, come!” In verse 23, Paul blessed the Corinthians, praying that the grace of the Lord Jesus would be with them. In verse 24, Paul said that his love would be with the Corinthian believers in Christ Jesus. This is the end of this chapter, but we can see that it paints a beautiful and positive ending.

The theme of 1 Corinthians is love and unity

In 1 Corinthians 1, Paul mentioned some divisions in the Corinthian church. Some said they followed Paul, others said they followed Apollos, while others said they follow Cephas. But Paul said, in effect, “Only Christ was crucified for us.” He said in 1 Corinthians 2:2, “For I decided to know nothing among you except Jesus Christ and him crucified.” He said in verse 3:6, “I planted, Apollos watered, but God gave the growth.” 1 Corinthians 4:6 says, “I have applied all these things to myself and Apollos for your benefit, brothers, that you may learn by us not to go beyond what is written, that none of you may be puffed up in favor of one against another.”

In chapter 5, Paul deals with sexual immorality. He explains that “a little leaven leavens the whole lump” (1 Corinthians 5:6). Paul wanted to deal with those who were sinning and committing sexual immorality. He hoped that everyone would be united in love and not be affected by the sins of individual believers.

In Chapter 6, Paul advocates that during times of contention, a church member should act as a mediator so the church wouldn’t need to file lawsuits against other believers. This clearly supports the theme of unity. In chapter 7, Paul discusses marriage. He encourages spouses to live in unity. Even nonbelieving spouses should stay together unless the unbelieving spouse wants to separate. Chapter 8 deals with eating foods sacrificed to idols. Paul says that even though idols are nothing, he suggests not eating foods sacrificed to idols because he cares about people with weak consciences. Chapter 9:22 says, “To the weak I became weak, that I might win the weak. I have become all things to all people, that by all means I might save some.” In order to live in harmony with others and win people who are different, Paul tries to be like them. Paul’s life is consistent with the principle of love and unity.

Chapter 10 continues to discuss food sacrificed to idols. Paul talks about the importance of taking other believers’ needs into consideration so as not to cause them to stumble. Chapter 11 talks about the Lord’s supper. In Corinth, the rich would eat and drink and get drunk, while the poor would come late and see a pile of leftovers. Paul was very angry with the Corinthians and rebuked them. He told them not to turn the Lord’s banquet into a meeting that humiliated the poor. These teachings would help the Corinthians maintain a spirit of love and unity.

Chapters 12-14 talk about love, spiritual gifts, tongues, the fulfillment of prophecy, and whether women can speak in meetings. All of these topics relate to love and unity. Believers are free to pursue the gift of tongues, but if speaking in tongues causes others to stumble, they should not speak in tongues in meetings. Instead, they should only speak in tongues in private. I don’t believe Paul was against women speaking or asking questions in church. Perhaps some of the Corinthian women were working against the love and unity of the church, so Paul rebuked them. He wanted to silence certain women who were violating the principles of love and unity, but he was not delivering a universal principle that women ” are not permitted to speak.”

Does chapter 16 continue the theme of love and unity? Yes.

In chapter 16 verses 1-3, Paul specifically mentioned that a financial donation was to be sent to Jerusalem. In this passage, Paul was taking love and unity into consideration. He also hoped to bring the financial blessing from the Gentile church to the poor believers in Jerusalem, thus bringing unity between the Gentile and Jewish churches.

Paul wrote the book of Romans while he was in Corinth. There was once a serious racial conflict between Jews and Gentiles in Rome. Even when Claudius ordered the Jews to leave Rome, Priscilla and Aquila traveled from Rome to Corinth and met Paul (Acts 18). Paul had always wanted to go to Rome, but he was determined to go to Jerusalem first to bring the offering from the Gentiles to the poor in Jerusalem. He didn’t know if he would make it to Rome alive, so he wrote the book of Romans from Corinth to help the Roman church mediate the disputes and conflicts between the Gentile and Jewish believers.