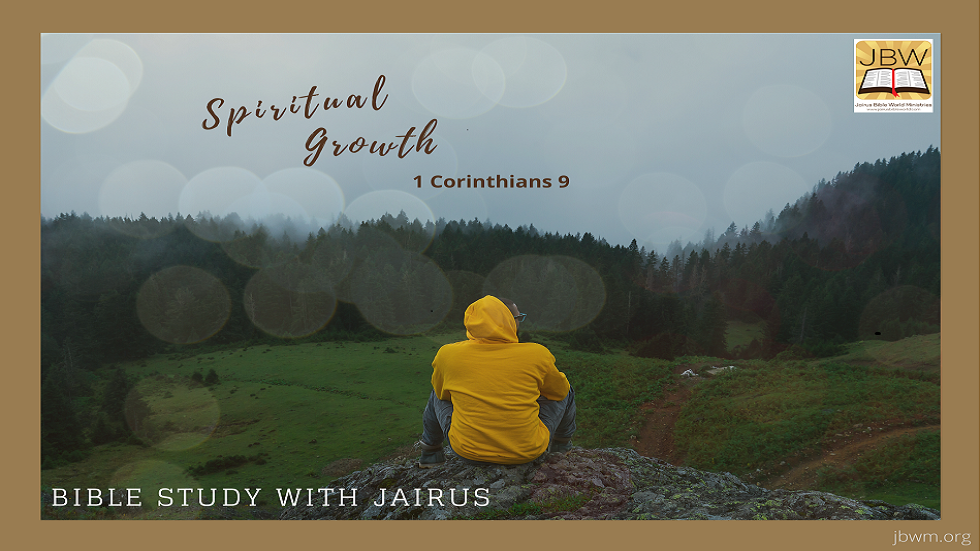 One of the themes discussed in 1 Corinthians 9 is Christian love and care. Paul continues to emphasize these themes throughout the entire book of 1 Corinthians. Before we have the right to shepherd and discipline others, we must first demonstrate our love and care for them. A nursing mother who has tenderly nurtured her children will be respected when she disciplines and educates them. When we first demonstrate love to others, they will be more likely to accept our teaching and help.

This chapter describes how Paul seized the opportunity to shepherd the believers he did not know well. Some of the brothers and sisters in the Corinthian church had not been trained personally by Paul, so he had to make an investment of love before he could make a withdrawal of teaching and accountability.

Love is patient. Paul’s definition of love in 1 Corinthians 13 is not just a theory, but a principle he put into practice with the Corinthian church.

Paul builds a relationship with the Corinthians

When we read the Bible, it’s important to understand the feelings of the people involved and the relationship between the speaker and their hearers. Some of Paul’s letters were addressed to people he had personally trained. These people listened to him and opened up to him because they had experienced his personal love and care. Perhaps the members of Chloe’s household mentioned in 1 Corinthians 1:11 knew Paul personally. They informed Paul of the situation in the Corinthian church. But others in the Corinthian church may not have known him well.

A working mother who can’t be at home with her children when they are small allows others to raise them. In this case, the children often feel closer to the nanny than they do to their mother. In the same way, Paul was a traveling preacher who had not built a long-term relationship with the Corinthians. As a result, the Corinthians felt closer to Apollos and others than they did to Paul.

Some members of the Corinthian church may not have been saved through Paul’s ministry. They were likely not trained by him either. They criticized him as being “base among them in person ” (2 Corinthians 10:1 NIV). The word “base” in the original text is translated as “humble” in some versions. But this translation does not reflect the meaning of the original text. The original word is ταπεινός (tapeinos), which means “humble” and “timid”. The New International Version and the New Living Translation translate the word as “timid”. The Chinese recovery version translates it as “base”, in an attempt to express the derogatory meaning of the original word. According to the annotation in the Recovery Version, it says the word “base” connotes “the pagans’ disdain for the humble virtues of the Christians back then.” The Recovery Version Bible doesn’t cite this quotation, so I don’t know its origin. Although this word has different interpretations in translation, the controversy itself opens a window of understanding. This word may have different meanings that help us understand the passage.

Second Corinthians 10:10 makes it clear that these believers were critical of Paul. The Recovery Version reads like this: “Because while his letters, someone says, are weighty and strong, his bodily presence is weak and his speech contemptible.” The Chinese Union Version says, “For some say, ‘His letters are weighty and forceful, but in person he is unimpressive and his speaking amounts to nothing.’” Clearly, these believers were criticizing Paul. They refused to open their hearts to Paul. This was one of the main reasons for the strife and competition within the Corinthian church.

I once heard a story about a Chinese parent in the United States who sent her first child to live with her mother in China because she was busy with work and with her second child. After the child returned to the United States, the parents noticed a distance in their relationship. The child didn’t feel close to her parents. For years, her parents had been absent, and she had lived with a doting grandmother. Now, the child threw tantrums and gave her mother a lot of headaches.

This is a normal reaction. When children grow up with absent parents, they feel like they are abandoned. Their hidden anger eventually comes out. Since the parents are away for such a long time, the children no longer feel close to them.

More importantly, the people in the Corinthian church were spiritually immature, like babies. Paul, who compares himself to a nursing mother (1 Thessalonians 2:7), was often not around. Apollos and others took care of the Corinthians while he was gone. They were like foster mothers who nursed and nurtured the young church. The church began to feel distant from Paul and to feel close to Apollos and the others.

Let’s return to our example of the child who was sent to China. It was understandable that she felt angry after returning to the United States. She didn’t understand why her parents had left her. So, what should her parents do? They should spend even more time caring for her. They should work towards developing a close relationship with her, built slowly over time.

Perhaps when the Corinthians criticized Paul, they were expressing their anger about his absence in their life. Paul loved the Corinthian believers, even though they criticized him. Since he wasn’t around much, he must have regretted the fact that he wasn’t able to be with them constantly to take care of them. When he heard their complaints, he didn’t respond in anger. Instead, he encouraged them and showed his love for them. Paul responded like a loving parent who wants to reestablish a bond.

In 1 Corinthians 9, Paul opens up and shares his testimony. He tells the Corinthians how he was called by the Lord to be an apostle (verses 1-3), how he gave up his right as an apostle (verses 4-15), how God entrusted him with a stewardship (verses 16-23), and how diligently he is running the Christian race (verses 24-27). In other words, Paul is demonstrating the great sacrifices he has made for God’s calling, including sacrifices he’s made for the believers in Corinth. Paul wants them to know that the reason he is running around like this is because of God’s calling on his life. But it doesn’t mean he doesn’t miss the Corinthians or care about them.

Spiritual growth: the antidote to competition

There was a lot of competition and immaturity in the Corinthian church. Because the church lacked spiritual authority and Paul and Apollos were not permanent pastors, everyone in Corinth was competing. Any church that lacks spiritual authority will experience the same conflicts. A church with spiritual authority guides its members toward good behavior and submission. But in a church without authority, no one submits to anyone. The only solution to this competitive rivalry is love, spiritual growth and maturity.

True authority comes from God’s calling and our surrender to God. That’s why Paul said he had no choice but to preach the gospel. Because of God’s calling, he felt “obligated to preach.” (1 Corinthians 9:16 BSB) All who are called by God go through the process of struggle and surrender. Paul was no exception. While we don’t know exactly how Paul struggled, we can see glimpses of the struggle in 1 Corinthians 9. Paul said, “For if I preach the gospel, that gives me no ground for boasting. For necessity is laid upon me. Woe to me if I do not preach the gospel! For if I do this of my own will, I have a reward, but if not of my own will, I am still entrusted with a stewardship.” (1 Corinthians 9:16-17).

To some, this verse is confusing. Is Paul still struggling with God’s calling? Perhaps he is. He used to be an active persecutor of Christians among the Judaists, a religious leader with very high status. Accepting God’s calling was equivalent to betraying his social class. He would also face great persecution. That’s why Paul may have wavered and struggled with God’s call on his life.