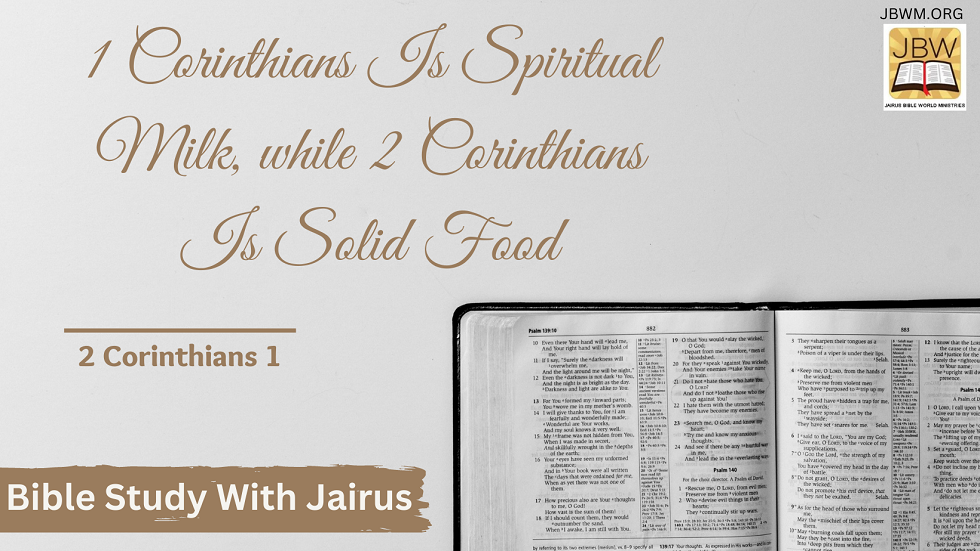 The book of 2 Corinthians teaches about spiritual maturity. Chapter 3 tells us that when we turn away from the law and toward the Lord, the veil is removed from our hearts. As we learn to know the Spirit of the Lord, we gain freedom. Our hearts become like mirrors that reflect the glory of the Lord as we are transformed into his image (3:16-18). These verses speak of a Christian’s deeper experience in his spiritual life.

Summary of the Last Three Chapters of 1 Corinthians

Let’s briefly analyze the link between the last three chapters of 1 Corinthians and the first chapter of 2 Corinthians.

In 2 Corinthians 1:1, we read that Paul and Timothy wrote to the church of God in Corinth and to the saints in Achaia. This verse is very interesting. As I mentioned earlier, Stephanas probably became one of the leaders of the Corinthian church. This is very important. When a church has a good leader, things go more smoothly. Since Stephanas was saved in Achaia, he probably had close ties with the saints in Achaia. Perhaps Stephanas played a very important role in bringing change to the Corinthian church.

According to the introduction of the “Comprehensive Bible Prayer Reading Website” (cmcbiblereading.com), the background of 2 Corinthians is as follows:

Paul first came to Corinth during his second missionary journey in A.D. 50-51. He worked with Aquila and Priscilla, preached the gospel there for a year and a half, and established the church (Acts 18:1-18). After Paul left Corinth in A.D. 51, he wrote the first letter to the Corinthian church, telling them to “have no fellowship with fornicators” (5:9-10), but this letter has been lost. During Paul’s stay in Ephesus on his third missionary journey, Chloe’s people brought a message that there was division in the Corinthian church (verse 11), and the church also wrote a letter to him (1 Corinthians 7:1), hoping that Paul would give them some guidance on problems. Paul may have written a second letter at Ephesus in A.D. 54, and 1 Corinthians as his answer (1 Corinthians 16:8-10; Acts 19:22). Later, the situation in the Corinthian church continued to deteriorate. Paul may have traveled directly from Ephesus to Corinth by boat (2 Corinthians 1:16), making a second brief visit to Corinth (2 Corinthians 13:2; Acts 20:2). The visit was not very pleasant at the time. Afterwards, Paul wrote a third letter that was severe (2 Corinthians 2:4; 7:8), which was delivered by Titus, but was also lost. Later, Titus brought the news to Macedonia, saying that everything was alright (2 Corinthians 7:6-7). Paul was thus overflowed with joy and wrote the fourth letter in Macedonia in A.D. 56, which is “2 Corinthians” (2 Corinthians 2:12-14; Acts 20:1). After this, Paul probably visited the Corinthian church for the third time (2 Corinthians 12:14; 13:1), and wrote the book of Galatians and Romans in Corinth in the winter of A.D. 56-57 (Acts 20:3).

This summary helps us see that although the Corinthian church had some problems, Paul worked tirelessly to help them. Through his efforts, their lives were transformed. Paul said in 1 Corinthians 3:1-2 “But I, brothers, could not address you as spiritual people, but as people of the flesh, as infants in Christ. I fed you with milk, not solid food, for you were not ready for it. And even now you are not yet ready.”[1] Paul’s words in 1 Corinthians were addressed to the fleshly believers who were so spiritually immature that they could only drink spiritual milk.

The first type of church tends not have a solid foundation in God’s word and are more are easily deceived by the winds of teaching. The second type of church is often overly concerned with knowledge and truth, which leads to dogmatism and legalism. They often are against the work of the Holy Spirit. And they easily condemn others as heretics. These two extremes cause problems in Chinese churches and American churches alike.

It may surprise you to learn that these errors are a manifestation of spiritual immaturity, not of maturity. Paul told the Corinthians that it was difficult for him to lead them into deeper spiritual life and experience since they were stuck in immaturity. But the path toward maturity was inseparable from God’s training through suffering.

A Deeper Spiritual Life and Experience

In 2 Corinthians 2, Paul says that the life of Christ within us gives off the “aroma of Christ” (2:14) to those around us. This aroma brings life to some and death to others. When we testify to others, some believe in Christ and are brought back to life, while others oppose Christ and are left to die. What a privilege it is to represent Christ in this way. Jesus told his disciples, “If you forgive the sins of any, they are forgiven them; if you withhold forgiveness from any, it is withheld.” (John 20:23). This does not mean that we have the authority to forgive like God does. Rather, it means that God has given His authority to the church, and he has entrusted us with a tremendous responsibility. When we as Christians demonstrate a consistent Christian testimony to the world, others often believe in Christ as a result of our witness. When Christians do not have a testimony and do not love one another as what Jesus taught, the world stumbles and cannot see that we are His disciples (John 13: 35).

2 Corinthians 3 tells us that God can remove the veil from our hearts. When our heart turns to the Lord, the veil is removed. Our hearts are like mirrors that reflect the glory of the Lord and transform us into His image. This is why Paul said believers are to imitate him as he imitates Christ (1 Corinthians 11:1).

2 Corinthians 5 tells us that we are new creations in Christ (5:17). Once we are saved, we are new in Christ. Yet many people do not live in the full knowledge and experience of this truth. Instead, they continue to live in past sins. So, Paul taught them not to look at past failures, but to look at the victory that was theirs in Christ.

In 2 Corinthians 6, Paul encourages believers not to associate with idols, because believers in Christ are incompatible with idols and darkness. Instead, believers should pursue holiness (6:14-17).

Suffering is an Important Ingredient for Spiritual Maturity

Suffering is an integral part of our journey toward spiritual maturity. The book of Hebrews says that even the Lord Jesus learned obedience through the things that He suffered (Hebrews 5:8). Hebrews 12 tells us that God’s discipline, though painful, bears the peaceful fruit of righteousness for those who have been trained by it (Hebrews 12:11).

Suffering has a positive effect on a person’s spiritual maturity, just like the storms encourage trees and vines to grow deeper roots. Once the sun comes out, we can see the benefit of these harsh weather conditions. The deeper the roots of the plant or tree, the more vigorously it can produce rich fruit.

Therefore, after a brief greeting in 2 Corinthians 1:1-2, Paul talks at length about suffering (vs. 3-11). His words about suffering are intense. Paul shares that the suffering he endured in Asia was so great that he felt that he could no longer live (vs. 8). His trust in God, who raises the dead, was the only way he was able to endure this great suffering.

Although Paul also talked about God’s comfort to believers who are suffering, this chapter gave some harsh truths. This “solid food” was not easy for immature believers to accept. But the readers of 2 Corinthians had grown considerably in their spiritual lives, and they were able to handle solid food.

The more we mature, the more we are able to handle suffering. After I dedicated myself to God, the difficulties in my life increased. God sent these difficulties to help me crucify my flesh, so that I could learn to experience the cross of Christ. These trials helped me grow spiritually. They helped me become more deeply rooted in the life of Jesus.

Around 2016, I experienced a breakthrough in my personal life. Our prayers were answered by God. Not only did we give birth to a miracle baby, but I also received the baptism of the Holy Spirit that I had been longing for. I once heard Brother Derek Prince say, “The most obvious manifestation of the baptism of the Holy Spirit is not prophesying or speaking in tongues, but increasing difficulties.” My experience has proved this to be true. After receiving the baptism of the Holy Spirit, the evil spirits began to attack me even more. My own flesh and the people around me began to attack me, causing never-ending trouble. But these troubles and difficulties were actually tools in God’s hands, helping me grow spiritually and learn more humility.

In 2 Corinthians 1:20-22, Paul tells us that all God’s promises are Yes in Christ. Because we are joined to Christ, we are given His Spirit as a guarantee. What does this mean? It means that God’s promises are more amazing than we can imagine. He can do more than we ask or think. But when we are spiritual infants, we often do not access these promises or manifest them in our lives.

God has given us many promises to enjoy in Christ. But in order to experience them, we must grow spiritually. The seal of the Holy Spirit within us is like a sample, similar to the soil sample we get when we buy land. We need to not just settle for this sample, but to dig deep into all the riches we have in Christ.

I believe the fundamental reason for the degeneration of American society and the church is that American believers are not mature enough. This is the reason why anti-God forces can run rampant in the United States, even though the majority of the population professes Christianity. The teachings of 1 Corinthians are very important for the spiritual growth of today’s Christians, and for breaking away from the fleshly life.

Therefore, we urgently need to study these two letters, 1 Corinthians and 2 Corinthians. In them, Paul reveals a wealth of wisdom that helps us deal with the flesh, leave behind spiritual infancy, and enter a state of spiritual maturity. This is the theme of 2 Corinthians. As we study the rest of the chapters of 2 Corinthians, we will continue to explore how Paul’s teachings can help us become more spiritually mature.