Bible Study with Jairus – Acts 13 The Paradox of Salvation: God’s Election and Man’s Free Will 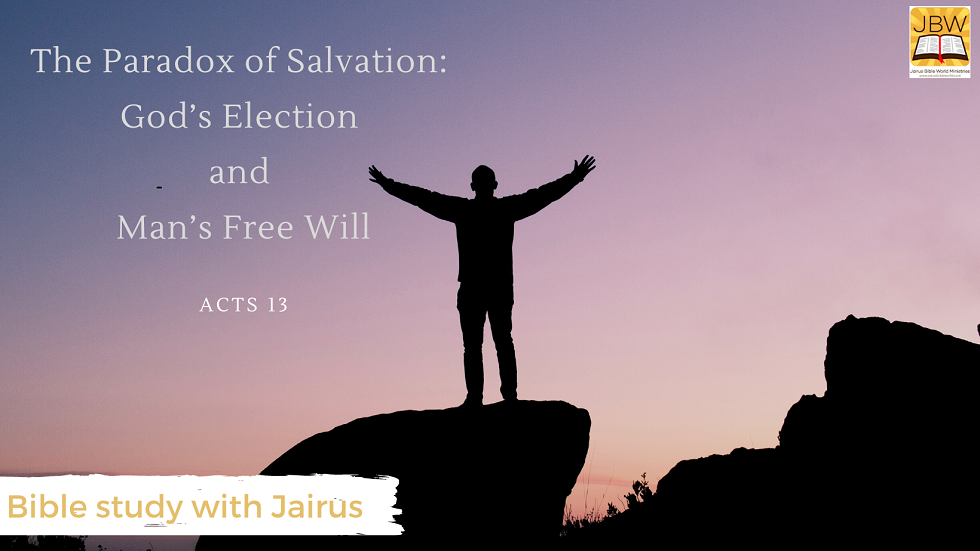 The Paradox of Salvation: God’s Election and Man’s Free Will

One of the big questions that frequently arises in Christian circles is the relationship between God’s sovereign election and man’s free will. Does God choose who will be saved, or is it determined by our own subjective choice?

God’s Election and Man’s Subjective Will

Acts 13:48 says, “And when the Gentiles heard this, they began rejoicing and glorifying the word of the Lord, and as many as were appointed to eternal life believed.”[1] How can we understand this verse? How do we know who is appointed by God to eternal life? Are we saved by God’s election or by our own free will?

One prominent evangelist said that as Christians approach the gates of heaven, they see a sign that reads, “Whoever believes shall have eternal life.” However, after they pass through the door, they turn back and see a sign that says, “You were chosen before the creation of the world.” In other words, before salvation, we make a choice. After salvation, we realize we were chosen.

Before a person is saved, debating election is unhelpful. For an unbeliever, the only message is “believe.” Satan wants us to waste time debating who is “chosen before the creation of the world” and miss the salvation that is right in front of us.

God chooses us first, and then he works to win our hearts. For instance, God chose Isaac’s son Jacob, and eventually captured Jacob’s heart (despite his resistance). This story demonstrates the importance of God’s unconditional election, despite human resistance. However, our free will also plays a very important role. If we choose to harden our hearts towards God continually, he may allow us to refuse his free gift.

Acts 13 gives a good example of this concept. The false prophet Bar-Jesus was strongly opposing the apostles’ words. Acts 13:7 says, “[Bar-Jesus] was with the proconsul, Sergius Paulus, a man of intelligence, who summoned Barnabas and Saul and sought to hear the word of God.” Paul, filled with the Holy Spirit, rebuked Bar-Jesus. He said that Bar-Jesus would become blind, and he did. Astonished, Sergius Paulus believed in Jesus. Sergius Paulus made a choice to believe.

In Acts 24, we see another person who was interested in Christ. The governor Felix and his Jewish wife Drusilla enjoyed listening to Paul talk about Jesus Christ (Acts 24:24). Felix understood Christianity and was concerned about righteousness, self-control, and the coming judgment (Acts 24:22, 25). He was counting on Paul to send him money, so he often sent for Paul and conversed with him. But there is no record that he believed. Instead, Felix left Paul in prison to do the Jews a favor (Acts 24:27).

My personal guess is that Felix wasn’t saved, while Sergius Paulus was. Why? Did these men make a choice, or did God choose one and not the other? God wants everyone to be saved and to come to the knowledge of the truth (1 Timothy 2:4). So in a general sense, God has chosen everyone. But the difference in our hearts—that is, our free will—will bring about completely different results. God does not interfere with our free will.

Are we worthy of God’s eternal life? If our heart is willing, we will receive God’s life. For “If you confess with your mouth that Jesus is Lord and believe in your heart that God raised him from the dead, you will be saved.” (Romans 10:9).

Why did the disciples shake the dust off their feet?

Acts 13:51 says, “They shook off the dust from their feet against them and went to Iconium.” Why shake off the dust?

I believe that they shook the dust off their feet as a prophetic act with spiritual implications. For instance, Moses threw a branch into the water, making it sweet. This was a prophetic act. It was God who made the bitter water sweet, but this prophetic act allowed Moses to demonstrate his faith. Baptism is another example of a prophetic act. Baptism is a physical action that shows our attitude or obedience to Christ. It shows that God is baptizing us into Him. Similarly, when the disciples shook off the dust from their feet, it was a visible external act that prophetically expressed the invisible truth. God had drawn the line. This city was clearly in rebellion against him.

Shaking the dust off one’s feet is somewhat similar to “breaking ungodly soul ties,” a concept taught in the Healing and Deliverance Ministries. This theory teaches that if we have an ungodly extramarital sexual connection with someone or if we watch pornographic videos, we will develop ungodly soul ties with other people and evil spirits. The Bible tells us that when we join ourselves to a prostitute, we become one flesh with the prostitute. But when we join ourselves to the Lord we become one spirit with Him (1 Corinthians 6:16-17). We need to repent, confess our sins, and declare that we are breaking these ties so that the Holy Spirit can help us break free from them. Then we will not be further influenced by the evil spirits entering through these soul ties. If we are not willing to repent, God will not force us to do so. He does not violate our free will. But these ungodly soul ties are the entrance through which the evil spirits continue to attack us.

All who oppose the Lord’s work are participating with evil spirits; these evil spirits want to drag them into hell. Martin Luther King Jr. once said, “The guilty one is not he who commits the sin in darkness, but the one who causes the darkness.” Who is the creator of darkness? Satan, of course. Satan and the evil spirits have designed various methods of deception and temptation. They want to harden and darken people’s hearts, influencing them to reject salvation. We must break free from Satan and the influence of evil spirits. Then we can be saved and choose faith.

Disconnect from Satan and Evil Spirits and Choose Faith

The next two stories in this chapter show us that longing for God brings very different results than living in jealousy and selfishness.

In this chapter, Paul preaches in the synagogue about Jesus’ death and resurrection and the history of Israel (Acts 13:13-43). He explicitly states that Jesus, the descendant of David, is the Savior of Israel (Acts 13:23). The Israelites crucified Jesus because they did not know who he was. But God raised Jesus from the dead. The Bible says, “After the meeting of the synagogue broke up, many Jews and devout converts to Judaism followed Paul and Barnabas, who, as they spoke with them, urged them to continue in the grace of God.” (vs. 43) The hearts of these people were open, and they accepted Jesus Christ.

But the next paragraph records the story of some Jews who turned against Paul and Barnabas because of jealousy. The next Sabbath, nearly the whole city came to hear Paul and Barnabas. Verse 45 says, “But when the Jews saw the crowds, they were filled with jealousy and began to contradict what was spoken by Paul, reviling him.”  Evil spirits took advantage of these men’s jealousy to build strongholds and ungodly links within them. Their hearts began to harden, and they ultimately rejected salvation.

Paul told the people that since they rejected the word of God, he must go to the Gentiles to preach the gospel. He said that God had sent him to be a light for the Gentiles and to bring salvation to the ends of the earth (Acts 13:47). Angered, the Jews “incited the devout women of high standing and the leading men of the city, stirred up persecution against Paul and Barnabas, and drove them out of their district” (Acts 13:50). Both Paul and Barnabas shook off the dust from their feet, left Antioch, and went to Iconium.

This story is consistent with Jesus’ teachings. Jesus told his disciples, “And whatever town or village you enter, find out who is worthy in it and stay there until you depart. As you enter the house, greet it. And if the house is worthy, let your peace come upon it, but if it is not worthy, let your peace return to you. And if anyone will not receive you or listen to your words, shake off the dust from your feet when you leave that house or town. Truly, I say to you, it will be more bearable on the day of judgment for the land of Sodom and Gomorrah than for that town.” (Matthew 10:11-15).

God gives us free will to test our hearts. He wants to know if we will voluntarily love Him and choose Him. Our heart is important to God. If our heart accepts God, we are worthy of His salvation and will receive His peace. But if our heart does not want God, we are not worthy of His salvation and will be disciplined by Him in the future. Although Satan and the evil spirits have created darkness to deceive us, God has prepared the light of the gospel. The sunlight from on high has visited us, to guide our feet into the way of peace (Luke 1:78-79). But if we refuse to be guided by this light, we will remain in darkness.

The question about God’s election or man’s free will is addressed by several stories in this chapter. God chose us and sent His Son, Jesus Christ, to be our salvation. But we must also choose him with our own free will. God never forces us to change our hearts. But He hopes that we will choose Him and be worthy of His salvation.