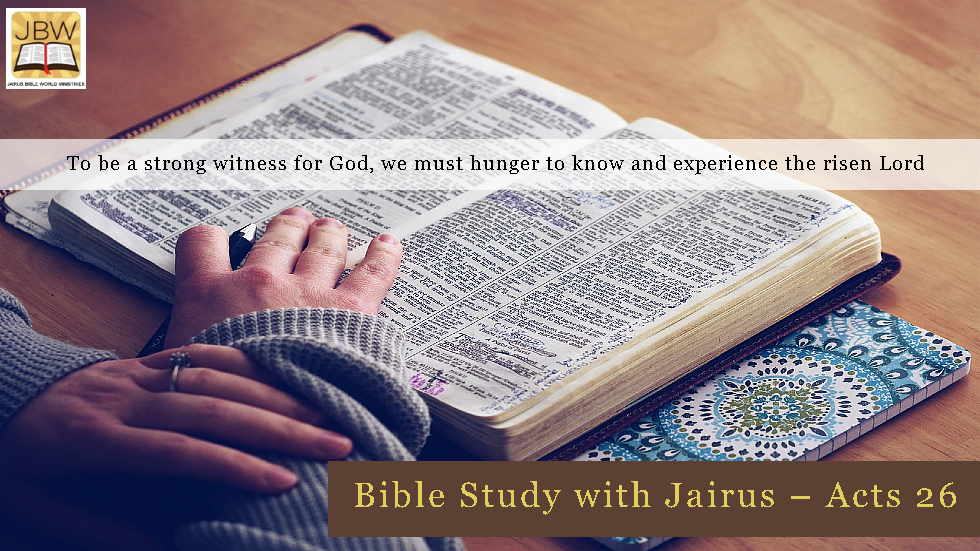 Acts 26 was the most important turning point and transition in Paul’s life as he testified about the Lord from Jerusalem to Rome. Paul’s calling was to be an apostle to the Gentiles. But he could not let go of his fellow Jews, so he hoped that the Gospel could be spread further among them first. Although the prophet Agabus and others prophesied that he would be bound in Jerusalem, Paul still resolutely went to Jerusalem and was bound and taken to Rome. This chapter talks about his experiences testifying in Rome.

The Bible is our textbook. It transcends time and space. God makes the logos or written words of the Bible come alive through the Holy Spirit, which is known as a rhema word.  As a Chinese Christian, I believe that God has called me to help evangelize China.  A Korean prophet told me that God would evangelize China in the 21st century.  Many Chinese Christians would agree with this.

The book of Acts helps us to draw from their lessons and experience to help us do the work of evangelism today.

A sentence that we don’t quite understand in this chapter is 26:32. After King Agrippa heard Paul’s appeal, he said to Festus, “This man could have been set free if he had not appealed to Caesar” (NIV).

To be honest, this sentence disturbed me because reading the Bible is like watching a movie. When you immerse yourself in the plot of this movie, you are very concerned about the fate of the protagonists in the film, hoping to give them some advice to help change their future. I often say that the Holy Spirit is the best screenwriter. When writing the Bible, each chapter is like a small movie. After reading this far, I hoped that Paul wouldn’t appeal to Caesar so that he could be set free. But he did appeal to Caesar so he couldn’t be set free. Agrippa also said the same thing to Festus.  Although Paul tried to persuade Agrippa to believe in the Lord, Agrippa did not make a decision. Despite all this, his attitude towards Paul is somewhat sympathetic.  This sentence probably means that Agrippa wanted to set Paul free, but because Paul appealed to Caesar, he couldn’t do anything about it.

If I were the director of the movie (based on this chapter), I would not have had Paul appeal to Caesar so that he could be set free. But the Bible doesn’t record it that way. Why did Paul appeal to Caesar? What was God’s plan in this? Apart from Paul’s appeal to Caesar in the beginning, which could help him break free from the accusation of the Jews, now, they have reached a deadlock, and his appeal has kept him bound.

The Bible doesn’t record whether Paul met with Caesar while imprisoned or when he was set free.  Historical legends tell us that Paul was eventually set free and later beheaded by Emperor Nero around 67-68 A.D.  Emperor Nero ruled from 54-68A.D., while Constantine, the first Roman emperor who accepted Christianity, ruled from 306-337A.D. He began to embrace Christianity from 313 A.D., which was about 245 years after Paul’s death.   At that point, evangelization was accomplished to a certain extent in Europe.

We can see that Paul had established the foundation in evangelizing the cities of Europe. He even had the opportunity to testify before King Agrippa. Philippians 4:22 mentions that there are saints in Caesar’s household. That shows that although Paul’s evangelical work wasn’t able to directly change Caesar, it did affect the people in Caesar’s family.

In the United States, Vice President Pence is Christian, and President Trump also supports Christianity.  In contrast, mainland China and Taiwan are nowhere near the level of evangelization of the United States. Evangelization in China and Taiwan are even slightly worse than what Paul accomplished in Europe.  We can’t publicly testify or preach the Gospel to the government leaders either in bondage or freedom.

From the above analysis, God allowed Paul to appeal to Caesar. Maybe God wanted to use the opportunity to preach the Gospel to the high-level leaders of Rome through Paul. On the one hand, the Gospel is a civil movement. On the other hand, it is about changing the hearts of the top leaders. A man in our meeting said that if God can change a leader’s heart, the work of evangelization in that country will be much easier to carry out.

There are many examples in Latin American and African countries of leaders being changed by the Gospel through evangelism.  For instance, Argentine president Peron was healed of a skin disease when prayed for by Tommy Hicks.  This president then opened religious freedom and allowed Tommy to use stadiums in Argentina to preach the Gospel, which brought about the great Argentine revival.

Many people have prophetic gifts in the United States, such as Kat Kerr, Jeremiah Johnson, and Anna Rountree. They all said that they have experienced and witnessed Jesus walking through the walls in their homes. Wouldn’t it have been easier to change world leaders if Jesus had walked through the walls of their homes?  I can verify that these experiences are real because the Lord Jesus has appeared to me several times, although not quite as dramatic as the above examples.  God doesn’t always choose to dramatically appear to everyone.  He is more likely to appear to those who are longing for a deeper intimacy with Him.  He often decides to radically change a person’s life, like Saul, to make Himself known.  Saul then becomes Paul who testifies of his life-changing experience.

Evangelizing is a process.  Changing the President’s heart in Argentina certainly opened the door to the Gospel, but that’s not the only way.  Paul slowly but consistently changed the mindsets of the people in various cities, which in turn had the potential to change the leader’s hearts later.  If the majority of the people in a country are opposed to the Gospel, changing the leader’s hearts would not be enough.  Paul made much progress in evangelizing Europe.  When he appealed to Caesar, he was able to influence and change people’s hearts in Caesar’s family.  However, the Roman Empire did not accept Christianity until 245 A.D.  In other words, Paul indirectly influenced Constantine. I’ve heard that Constantine saw a vision of a cross in the sky during the war and believed that God would help him win the war, so he embraced Christianity.  If the vision was real, it looks like God appeared to him in some form.From the example above, we can see that evangelizing a country like China will take time.  I can testify from personal experience that Chinese leaders, as well as most of my family and friends, are not open to the Gospel.  China probably won’t experience a dramatic change like Tommy Hicks saw in Argentina.  More than likely, it will be more like what Paul did in Europe, a gradual process.  Even if Jesus walked through the walls of China’s leadership and convinced them, if the people still opposed God, the leader would face much opposition and not accomplish much.

Recently, after a prayer meeting about the coronavirus outbreak, I had a prophetic dream that took me into the future of what would happen in China.  Many Chinese people were worshipping God throughout the country.  There was a Chinese lady who led the tour of people accompanying me to see this.  She said this revival was not something she had seen when she lived on earth.  I also interacted with many Chinese believers there in glory.  I witnessed many things in the two hours I was there but only remember a few.

In another prophetic dream earlier, I was chased by a group of future Chinese democratic leaders who came to thank me for my articles. They said my writing greatly encouraged them. In the dream, I was puzzled as I saw that they were older than me. How could I influence them?  Later I realized this is a prophetic dream. God’s message might mean that the power of the Gospel will eventfully transform Chinese society.

The Bible doesn’t tell us whether Paul saw Caesar or whether he knew him.  We only know that he appealed to Caesar through King Agrippa.  Before Paul had his Damascus road experience with Jesus, he was rich in theological knowledge but did not know the risen Lord.  His whole life and perspective changed when Jesus appeared to him.

In other words, from the religious center of Jerusalem to the secular center of Rome, the turning point of Paul’s journey was his experience in Damascus. We need more people to experience what Paul experienced on the road to Damascus because the population of the world is much greater today.  There are countless examples of Jesus appearing to people in recent years, yet we need many more to go out into the world, testifying to the resurrection and power of Christ.As I mentioned in a previous study, we must be able to overcome the attack of religious spirits in our own Jerusalem so that we, like Paul, can be taken to Rome to preach the Gospel to the secular world.  Christians must have their own Damascus road experience to transition from Jerusalem to Rome.  To be a strong witness for God, we must hunger to know and experience the risen Lord to help us rid ourselves of the religious spirits and barriers contained in churches.