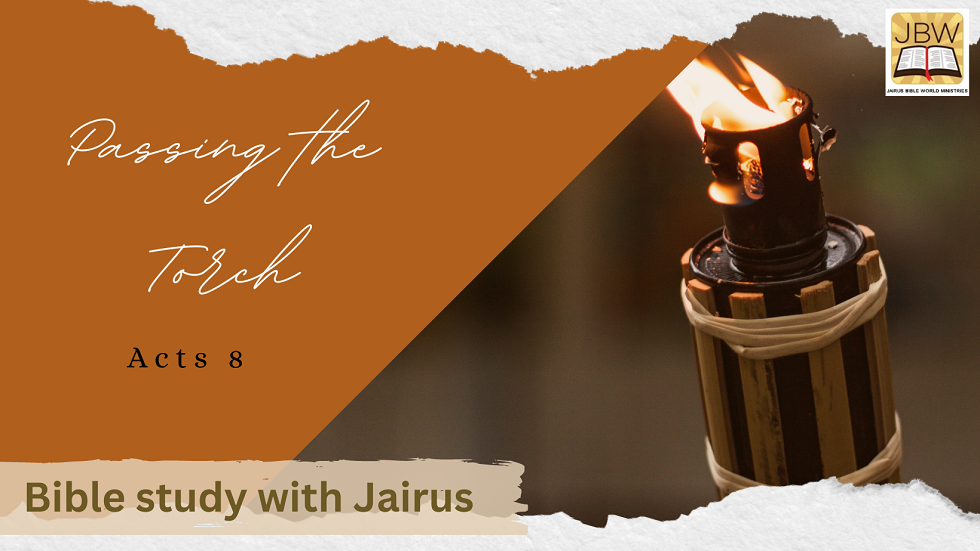 This chapter brings up many questions. Why did God perform so many signs and wonders through Philip, yet did not send the Holy Spirit until Peter and John were present? Why couldn’t Philip bestow the Holy Spirit? Why did Philip preach the gospel to the eunuch only after the Holy Spirit’s arrival? When Paul was baptized in Acts 9, was he filled with the Holy Spirit at that time?

I believe these intertwined stories pave the way for Paul’s appearance. In other words, Philip and Stephen are evangelists, and their anointing is passed on to Paul; Peter and John are apostles, and their anointing is also passed on to Paul. Paul is the culmination of the ministry of Philip and Stephen, as well as Peter and John. Paul was both an evangelist and an apostle.

At the end of Acts 7, we learn that Stephen was martyred. As he was dying, he saw the heavens open, and the Lord Jesus standing at God the Father’s right hand. At the time of his martyrdom, Stephen prayed for those who persecuted him, asking God the Father to forgive them because they did not know what they were doing.

Paul supported this senseless murder, and he personally witnessed Stephen’s martyrdom. He even guarded the clothes of the Israelites who killed Stephen. We believe that Paul was shocked by Stephen’s testimony and that this event laid the foundation for the great changes that occurred in Paul after the Lord Jesus appeared to him. The blood of the martyrs is the best testimony.

The sharp contrast between Stephen and Paul continues in Acts 8. Although Stephen was dead, the persecution did not stop. Paul continued to persecute the church: “But Saul was ravaging the church, and entering house after house, he dragged off men and women and committed them to prison.”[1] (Acts 8:3) The believers from Jerusalem who had been scattered continued to preach the gospel wherever they went.

It is in this context that the story of Philip preaching the gospel is introduced. Both Philip and Stephen were deacons chosen by the apostles to serve meals to widows. Both of them were “men full of the Spirit and of wisdom” (Acts 6:3). Stephen is mentioned in Acts 6 as “a man full of faith and of the Holy Spirit” (Acts 6:5) and “full of grace and power, doing great wonders and signs among the people” (Acts 6:8). And the description of Philip listed in chapter 7 is very similar – Philip also performed many signs and great miracles (Acts 8:13). Both Stephen and Philip were powerful evangelists whose words were accompanied by signs, wonders and miracles. They had a very similar anointing from God.

Philip’s story is not only a continuation of Stephen’s legacy, but it led to Paul’s appearance. Paul was a vessel specially prepared by God. As Paul gradually entered the stage and became the main character in the book of Acts, the anointing of evangelists such as Stephen and Philip would be passed on to him. Although the Holy Spirit uses different people at different times, the anointing within is the same and it continues.

The interaction between Simon, Philip, and the apostles

People were amazed by the signs and miracles Philip performed when he was preaching the gospel in Samaria. Simon, a local sorcerer, had often amazed people because of his magic. Even so, he was amazed by Philip’s miracles. He not only believed in Christ but was also baptized. At this point, the story of Philip’s evangelistic ministry ends (verse 13). In verse 14-25, the text records that the apostles Peter and John came to Samaria to lay their hands on the believers and pray. When they did, the believers were filled with the Holy Spirit. This amazed Simon more. Simon wanted to purchase this ability to lay hands on people and bestow the Holy Spirit.

When I was reading the Bible, there was one thing that confused me. Why wasn’t Philip able to bestow the gift of the Holy Spirit while he was preaching the gospel in Samaria? In modern charismatic churches, many gifted evangelists can lead people to pray and receive the Holy Spirit. Why didn’t Philip do it here? Why did he wait until Peter and John came before bringing down the Holy Spirit?

In short, I believe these early leaders in the church possessed two different gifts. One is the gift of evangelism, represented by Stephen and Philip, which was to be passed on to Paul. The other was the gift of apostleship, represented by Peter and John, which would also be passed on to Paul. Although these gifts intertwine, I believe that God allows the gifts to complement each other. Though Philip technically had the power to lay hands on people and bestow the Holy Spirit, it wasn’t his role. After all, evangelists and apostles are not the same. They are two distinct gifts mentioned in the Bible. Paul said, “He gave the apostles, the prophets, the evangelists, the shepherds and teachers” (Ephesians 4:11). Both of these gifts would be passed on to Paul. Philip’s choice paved the way for Paul’s appearance.

Did Simon receive the Holy Spirit?

Simon, a sorcerer from Samaria, had amazed people for a long time with his magic (Acts 8:10-11). Simon followed Philip and was amazed by his signs and miracles (Acts 8:13). Because Philip performed many signs and wonders, Simon believed and was baptized.

Yet Simon was still trapped by evil. On the one hand, the power of Philip’s evangelism brought him out of the darkness and into the light. However, he was not completely set free. When he offered to buy God’s gift with money, the apostles told him his heart was not right with God (Acts 8:21).

Being anointed by God breaks our yoke of oppression and our shackles of slavery. Isaiah 10:27 says, “And in that day his burden will depart from your shoulder, and his yoke from your neck; and the yoke will be broken because of the fat.” The last sentence “the yoke will be broken because of the fat” is often translated as “destroyed because of the anointing oil”. The Lord Jesus quoted Isaiah in Luke 4. He said, “The Spirit of the Lord is upon me, because he has anointed me to proclaim good news to the poor. He has sent me to proclaim liberty to the captives and recovering of sight to the blind, to set at liberty those who are oppressed, to proclaim the year of the Lord’s favor.” (Luke 4:18-19) God’s anointing sets the oppressed free.

The apostles urged Simon to repent so he would not be disciplined by God. Simon did pray, “Pray for me to the Lord, that nothing of what you have said may come upon me.” (Acts 8:24). The Bible does not record what happened next. Did the apostles pray for him? Did he receive the power of the Holy Spirit? According to some historical records, Simon still practiced sorcery later on. However, no one knows whether these records are reliable. Simon’s last recorded words were a request that the apostles pray for him, which demonstrates humility. Perhaps God did forgive him. I personally hope that Simon received the baptism of the Holy Spirit, but we won’t find out until we get to heaven.

Acts 8:25 says, “Now when the apostles had testified and spoken the word of the Lord, they returned to Jerusalem, preaching the gospel to many villages of the Samaritans.” After preaching the Lord’s words, the apostles went back to Jerusalem. God’s intention was for the gospel to spread from Jerusalem to all of Judea and Samaria and to the ends of the earth (Acts 1:8). But the apostles seemed unable to leave Jerusalem, either geographically or conceptually. They still divided people into groups: Jew and Gentile.

God needed to perform an intervention. The Holy Spirit led Philip to preach the gospel to the eunuch from Africa so that the gospel could be preached to the Gentiles. Notice that God’s call to Philip was the same as God’s call to Paul. When the Lord appeared to Paul, He clearly said to him, “Make haste and get out of Jerusalem quickly, because they will not accept your testimony about me.” (Acts 22:18); “Go, for I will send you far away to the Gentiles.” (Acts 22:21). This story of Philip’s evangelism paves the way for Paul’s appearance.

Philip preaches the gospel to the eunuch

Beginning in Acts 9, the ministries of Peter and Paul became intertwined. Peter’s ministry represented the first generation of apostles, while Paul’s ministry represented the second generation of apostles. The story of Philip recorded in Acts 8 concludes the story of evangelists like Stephen and Philip. Although Acts 21 briefly mentions Philip, the account focuses primarily on Paul’s ministry.

As I mentioned earlier, the Jerusalem apostles went to Samaria for a time, and then returned to Jerusalem. They found it difficult to leave Jerusalem. Acts 8:1 says, “On that day a great persecution against the church in Jerusalem, and they were all scattered throughout the regions of Judea and Samaria, except the apostles.” The apostles had seen God’s work and His signs and wonders in Samaria. So why didn’t they leave Jerusalem and preach the gospel to Gentile lands? This question is worth pondering.

Just like the apostles found it difficult to break free from Jerusalem, we often find it difficult to break through geographical limitations and limiting mindsets. When we become leaders, we often unknowingly protect our own interests and traditions. It is difficult for us to accept God’s new leading. Therefore, God often raises up new people or ordinary people to bring in His new movement.