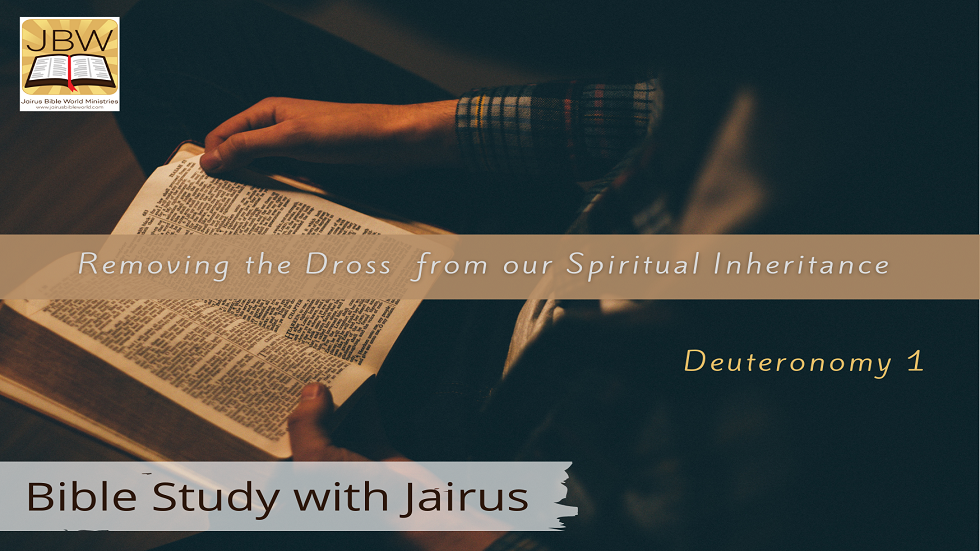 Removing the Dross from our Spiritual Inheritance

As a prophet of God, Moses represents God. As he speaks to the people, he wants to pass on a positive spiritual inheritance of faith. He wants to remind the second generation of the faithfulness of God. When the new generation learns from the mistakes of their predecessors, they will be able to enter a higher and richer spiritual destiny.

The second generation of Israelites was partially successful in following God. But they were not immune to failure and idolatry. Today’s Christians are in the same situation. On the one hand, we have received a rich inheritance in Christ. On the other hand, we also have inherited a sinful nature from Adam. Church tradition contains a rich inheritance mixed with a lot of dross. How we deal with these two determines whether we can reach greater spiritual heights. We need to polish our positive spiritual inheritance and remove negative dross so we can bring in the great revival of God.

When speaking to the second-generation Israelites, Moses recalls the incident of sending the twelve spies into the land of Canaan. He says, “Then all of you came near me and said, ‘Let us send men before us, that they may explore the land for us and bring us word again of the way by which we must go up and the cities into which we shall come.’” Deuteronomy 1:22[1] From this verse, it sounds like the twelve spies had been sent out in the recent past. In reality, the twelve spies had been sent out 40 years ago, by the first-generation Israelites (Numbers 12). So why does Moses say that “all of you” asked for spies, when it was really their ancestors who asked to send out spies?

In Christ or in Adam?

To help us understand why Moses spoke collectively to the first and second generations, let’s look at a few examples from the Bible. Often, descendants are included in their parents’ experiences.

We see that the experience of future generations can be included in the experience of the first generation. Romans 5:12 says, “Sin came into the world through one man.” That one man is Adam. When Adam (our ancestor) sinned, we were not yet born. But because one man sinned, sin came into the world. Those of us who were not yet born nonetheless became sinners. Just like the Israelites, we received a negative inheritance of sin.

But 2 Corinthians 5:17 says, “If anyone is in Christ, he is a new creation.” We also won a positive inheritance in Christ. When the Lord Jesus was crucified and resurrected, the Bible tells us that we were crucified with Him (Galatians 2:20). We were also resurrected (Colossians 2:12) and sat down with Him in heaven. Not only did we inherit sin from Adam, but we also inherited the victory in Christ. Like the second generation of Israelites had to choose between the positive and negative heritages that were left to them, we must choose to be “in Adam” or “in Christ.” Our choices can lead to very different outcomes.

It’s very important to note the time and place that this farewell address took place. Moses delivered this speech on the other side of the Jordan River as the second generation of Israelites prepared to enter the Promised Land. Because Moses was not allowed to enter the Promised Land, these sincere words were his farewell to the second generation of Israelites.

Moses spoke to a weary group of Israelites who had been wandering in the wilderness for 40 years (verse 3). The 11-day journey to the Promised Land had taken the Israelites 40 years because of their disobedience (verse 2).

Moses delivered his speech at a very important moment in Israel’s history. The unbelief and disobedience of the first generation led to God’s wrath and judgment. But the time of judgment had ended. The second generation of the Israelites was entering an era of change.

During a major change, it’s often easy to lose sight of the big picture. Small, practical details blind us to the overarching plan of God. For example, the tribes of Gad, Reuben, and the half-tribe of Manasseh were distracted with the land of Gilead on the east side of the Jordan River. They wanted to live there instead of crossing the Jordan River.

During this new era, God accomplished some environmental changes, removing some of the obstacles that formerly prevented the Israelites from entering the Promised Land. He began to drive out the kings who lived nearby. Deuteronomy 1:4 says, “This was after he had defeated Sihon the king of the Amorites, who lived in Heshbon, and Og the king of Bashan, who lived in Ashtaroth and in Edrei.”

These times of change were marked by shifts within the community. The Israelite community grew in faith as they entered this new era. After the spies were sent by the first generation of Israel, they were full of fear. They were frightened by the height of the Amorites. Their reports made the hearts of the Israelites melt (Deuteronomy 1:28). Although Moses reminded them that the LORD was with them (Deuteronomy 1:29), they did not believe these reports, leading to God’s wrath and judgment (Deuteronomy 1:30-40).

But now, their attitude had changed. In Numbers 21, when they faced the Canaanite king of Arad, they prayed to God. Numbers 21:2 records, “Israel vowed a vow to the Lord and said, ‘If you will indeed give this people into my hand, then I will devote their cities to destruction.’” Their attitude changed from fear to faith. They demonstrated their faith by praying and making a vow. After 40 years of wandering in the wilderness, the Israelites had learned the lesson of faith. God listened to their appeal and handed over the Canaanite king of Arad to the Israelites.

When New Testament believers face terrifying experiences of powerlessness, we must remember that God is on our side. We know that with man this is impossible, but with God, all things are possible (Matthew 19:26). We must believe in God’s power and ask Him to help us, so we do not fall into unbelief. As we trust in him, faith will be credited to our account, just like faith was credited to Abraham’s account when he believed that God could give him a son in his old age. Abraham could not give birth to Isaac himself, but he believed that God could. God honored his faith. After the Israelites defeated the king of Arad, they continued to win. They had successfully learned the lessons of faith. In Numbers 21, the Israelites defeated Sihon (king of the Amorites) and Og (king of Bashan).

Faith was the greatest inheritance that the second generation of Israel received. They learned lessons of faith the hard way, after watching their ancestors struggle in the desert for forty years. Only through faith could the Israelites enter the Promised Land. The book of Numbers ends with the faith of Zelophehad’s daughters. Zelophehad died in the wilderness for his own sin. However, his daughters not only acquired their father’s land, but also entered the Promised Land (Joshua 17). This was all accomplished through faith.

So what is the dross that the Israelites inherited? Despite the lessons of faith the Israelites learned in the wilderness, there was another lesson they had yet to learn: not to worship idols. Idolatry had haunted the Israelites like a ghost. When Moses was with God on Mount Sinai, Aaron created a golden calf for the people to worship. Later, because of Balaam’s trickery, the Israelites were seduced by Midianite women and committed adultery and idolatry.

While Numbers records the journey of the Israelites through the wilderness and describes how the Israelites learned lessons of faith, the book of Deuteronomy reminds the Israelites not to worship idols. The long listing of blessings and curses in Deuteronomy 27-30 shows Moses’ deep concern about idolatry. In the last chapter of Deuteronomy, Moses says, “For I know how rebellious and stubborn you are. Behold, even today while I am yet alive with you, you have been rebellious against the Lord. How much more after my death! Assemble to me all the elders of your tribes and your officers, that I may speak these words in their ears and call heaven and earth to witness against them. For I know that after my death you will surely act corruptly and turn aside from the way that I have commanded you. And in the days to come evil will befall you, because you will do what is evil in the sight of the Lord, provoking him to anger through the work of your hands.” (31:27-29) Although this passage refers to the Israelites’ rebellion, the Bible clearly states that, “Rebellion is as the sin of divination, and presumption is as iniquity and idolatry.” (1 Samuel 15:23). Following this passage, the last three chapters of Deuteronomy record the song of Moses (Deuteronomy 32), his blessing (Deuteronomy 33), and his death (Deuteronomy 34). The book of Deuteronomy records Moses’ worry about Israel’s idolatry.

The Church’s Inheritance and Dross

The spiritual lessons learned by the first generation can be passed on to the next generation. For example, the lessons of faith that the first generation of Israelites learned in the wilderness were passed down to the second generation. Stories of victory and faith were passed down, leaving a rich inheritance. Moses passed on lessons of faith and insights gained through suffering. But the second generation also inherited the spiritual dross, the idolatry their parents had never overcome through their lifetime.

As we appropriate this rich heritage and remove the spiritual dross from our lives, God will lead us into a higher spiritual destiny. At the same time, Satan will attempt to hinder us, bogging us down with spiritual baggage passed down from our ancestors. The positive spiritual inheritance and the negative dross are the respective manifestations of God and Satan in the church. We need to bravely appropriate the spiritual richness of the church and eliminate the dross passed down to us by tradition. Then we will be able to do greater works for God in these historical and changing times. Through reading the book of Deuteronomy, I hope you will acquire a rich inheritance from the Israelites and learn from their successes and failures. As Paul said, “Their experience is not only for them, but it also serves as an example for us.” (1 Corinthians 10:11).