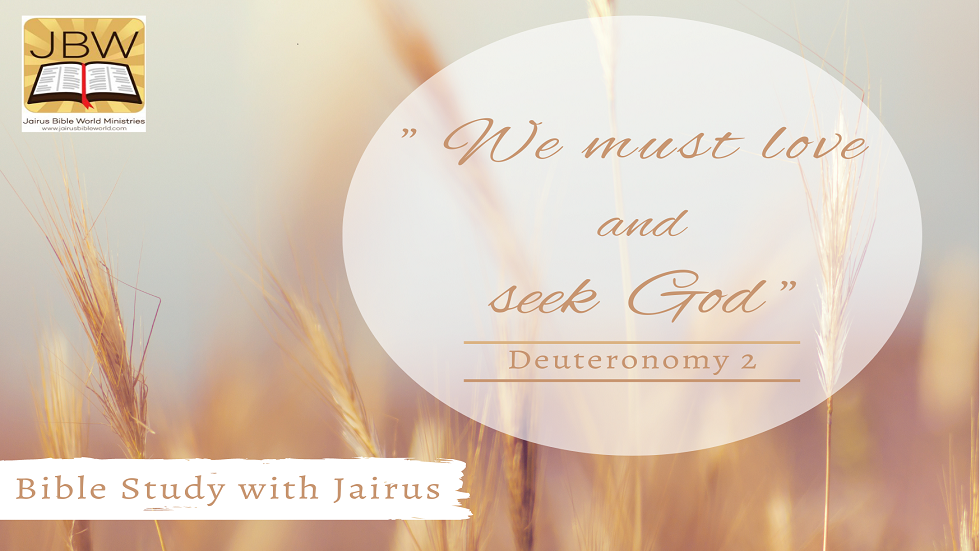 Deuteronomy 2 reminds us that a nation’s destiny is in the hands of God. A country’s boundaries are set by God for one purpose: so that people would seek him. Acts 17:26-28 says, “And he made from one man every nation of mankind to live on all the face of the earth, having determined allotted periods and the boundaries of their dwelling place, that they should seek God, and perhaps feel their way toward him and find him. Yet he is actually not far from each one of us, for ‘In him we live and move and have our being’; as even some of your own poets have said, ‘For we are indeed his offspring.’”[1] God determines the boundaries of each nation so that people would seek him and find him. But if they refuse to seek God and instead worship idols, they will be judged and even destroyed.

Deuteronomy 2 records the process by which God determined the boundaries of the nations. He not only gave land to Israel (verses 1-3), but also to Esau, Moab, and Ammon (verses 4-22). He records that the Caphtorites, a Philistine people group, destroyed the Avvim of Gaza and settled in their place (verse 23, see also Amos 9:7).

In Jeremiah, God said that He would destroy the Philistines who came from Caphtor (Jeremiah 47:4). Later, God did severely deal with them. Samson, David, and others brought vengeance on the Philistines, leading to their eventual extinction. It was God’s plan for the Philistines to come out of Caphtor.

On the one hand, God used the Philistines to discipline the Israelites when they turned away from Him. On the other hand, He used the Israelites to punish and discipline them. This principle also applies to Edom, Moab, and the Ammonites. Just like God sovereignly ruled these five ethnic groups, He controls the boundaries and futures of all nations. We must obey God. We must not do evil or worship idols so that we can receive His blessing. Otherwise, we will be judged by Him.

The Amorites are the evil spirits’ strongholds

In Genesis 15, God told Abraham that his descendants would be enslaved in Egypt for 400 years because the sin of the Amorites had not yet reached its full measure. The Amorites were an idolatrous nation that lived in Canaan. God gave them 400 years to repent, but they did not do so. So, after 400 years, God’s wrath and judgment fell on the Canaanites, represented by the Amorites. God told Moses that he must destroy the Canaanites (Deuteronomy 9:3-4). And later, when Saul became king, God told him to completely destroy the Amalekites (1 Samuel 15:18). When he refused to do so, God handed his kingdom over to David. By this time, God was totally committed to destroying the Canaanites. But earlier, God gave them multiple chances to repent.

Years earlier, God was angry with the Israelites because they refused to go into the promised land. The Israelites were afraid of giants and refused to conquer the Canaanites. God, in His wrath, forced the Israelites to wander in the wilderness for forty years. If you look at the situation from a different angle, you can see that God was giving the Canaanites another 40 years to repent.

The Canaanites heard about the miracles that God performed for the Israelites during their journey to the Promised Land. For example, in Joshua 6, Rahab said that she had heard how God dried up the Red Sea and killed the two kings of the Amorites, Sihon and Og, east of the Jordan River. These stories of God’s power made the Canaanites tremble, so she asked the spies to save her and her family. Unfortunately, only Rahab’s family repented and was saved. Many other Canaanites still did not repent, so they were eventually destroyed.

These people groups remind us of our sinful flesh. Just like the strongholds of evil spirits must be broken down, our flesh must be cut off. As the Israelites grew stronger as a nation, they conquered the other nations little by little. In the same way, as we grow spiritually, we will gradually experience God’s victory over our flesh.

The Avvim are mentioned in the Bible only twice. Deuteronomy 2:23 says, “As for the Avvim, who lived in villages as far as Gaza, the Caphtorim, who came from Caphtor, destroyed them and settled in their place.” And Joshua 13:3-4 says, “From the Shihor, which is east of Egypt, northward to the boundary of Ekron, it is counted as Canaanite; there are five rulers of the Philistines, those of Gaza, Ashdod, Ashkelon, Gath, and Ekron, and those of the Avvim, in the south, all the land of the Canaanites, and Mearah that belongs to the Sidonians, to Aphek, to the boundary of the Amorites.” The verses show that although this place is called the land of the Avvim, the Philistines already lived here.

Although we don’t know specific reasons that the Avvim were destroyed, we know that God cares about every person. Not a sparrow falls to the ground apart from his will. (Matthew 10:29). In addition, Amos 9:7 says, “ ‘Are you not like the Cushites to me, O people of Israel?’ declares the Lord. ‘Did I not bring up Israel from the land of Egypt, and the Philistines from Caphtor and the Syrians from Kir?’” The Lord brought the Philistines out of Caphtor, and then the Philistines destroyed the Avvim. This event must have been permitted in God’s sovereignty. We can conclude that the Avvim were also a race that God wanted to destroy. According to Joshua 13:3, the land of the Avvim was counted as the land of the Canaanites, so it can be inferred that the Avvim were also Canaanites. Their sins may have been the same as the sins of the other Canaanites.

Why did God destroy the Philistines?

How do we view the conflict of nations today?

I believe that we often cannot see the forest for the trees. Right now, we are too close to the situation to see it clearly. Instead, let’s look back in history to help us understand God’s will. During the American Revolutionary War, Americans disagreed about separating from Great Britain. One-third of Americans supported staying with Great Britain, while one-third advocated for independence. The rest of the Americans were undecided.

“There is a time for all things,” Muhlenberg said. “There is a time to preach and a time to fight. And now is the time to fight.” Then he took off his pastor’s robe, revealing a military uniform underneath. Later, he recruited hundreds of people to form the 8th Virginia Regiment, which made great contributions to the American Revolutionary War. This story became a legend in the American Revolutionary War. The story of him joining the army was painted on canvas and preserved in museums in the United States.

Later, many Americans agreed that their independence was God’s will and would bring many blessings to the world. Since the founding of the United States, the United States has given the most foreign aid to other countries and has become the “biggest exporter” of the gospel in the world. America has indeed become a city on a hill, preaching Jesus Christ as the gospel to the world. But at the time when the United States and Great Britain were in conflict, many people felt confused about the war. But the conflict and America’s eventual independence from Great Britain have brought great blessings to the world. Later, it became easier to see what God was doing to bring blessing through this war.

In the battle between Russia and Ukraine, we don’t yet know what God is doing. Of course, war is cruel and invasion is wrong, but what is the big picture? The big picture is that God will bring a great revival. War makes us feel vulnerable. It encourages people to seek God. Throughout the ages, there have often been great revivals after wars.

Perhaps God has a bigger purpose that he hopes to accomplish through this tragic war. As I prayed about this, I was reminded of Abraham fighting the kings and saving Lot. The king of Sodom and the other five kings betrayed Chedorlaomer. Then Chedorlaomer and his allies (the 4 kings) fought against them (the 5 kings), leading to their defeat. Lot and his family, who lived in Sodom, were taken captive. When Abraham heard the news, he took his servants to defeat Chedorlaomer and his allies, thus rescuing Lot. Later, the king of Sodom came to meet Abraham and offered to give him gifts. But Abraham refused. Then Melchizedek brought bread and wine. He blessed Abraham and said, “Blessed be Abram by God Most High, Possessor of heaven and earth; and blessed be God Most High, who has delivered your enemies into your hand!” Melchizedek was a priest of God Most High. Abraham gave him a tenth of everything (Genesis 14:19-20).

From this passage, we can learn an important lesson. Wars can be used by the enemy to take God’s chosen people captive, just like Lot was kidnapped in this passage. But as the saying goes, “The mantis stalks the cicada, unaware of the oriole behind him.” God prepared Abraham to save Lot. He also prepared Melchizedek to supply and bless Abraham with bread and wine.

God hardens the hearts of King Sihon and King Og

Deuteronomy 2:24-36 records that God hardened the hearts of King Sihon and King Og so that they could be destroyed by the Israelites. The prophecy by Kim Clement also mentioned that God hardened Putin’s heart like he hardened Pharoah’s heart. This is not good news. But why did God harden Pharaoh’s heart? It was because Pharaoh repeatedly refused to repent. When we repeatedly refuse to repent, God’s judgment will come upon us.

If God hardened Putin’s heart like he hardened Pharaoh’s heart and the hearts of Og and Sihon, then we should expect to see salvation for God’s chosen people. When God hardened Pharoah’s heart, the Israelites crossed the Red Sea and were saved. When he hardened Og’s heart and Sihon’s heart, he brought his people into the promised land. On the one hand, judgment will come upon Putin. On the other hand, salvation will come to many oppressed people. May the oppressed people and God’s chosen people be freed from captivity.

We must love and seek God

As we’ve mentioned, God sets boundaries so that we would seek him and find him. God allows wars so that people feel helpless enough to seek him. When people are satisfied with the status quo, they tend not to seek God so urgently. But in times of war, it becomes easier for them to seek God. Many great revivals throughout the ages have begun after wars, so we hope that a great revival will come soon.

We must learn from the experiences of the Israelites, Edomites, Moabites, Ammonites, Avvim, and Philistines. When we worship idols and love the world, we are bound to be disciplined by God. Instead, as God’s creation, we must seek Him. If we seek God, we will surely find Him. When we find him, we must love the God who orchestrates all events in history to draw us closer to his heart.