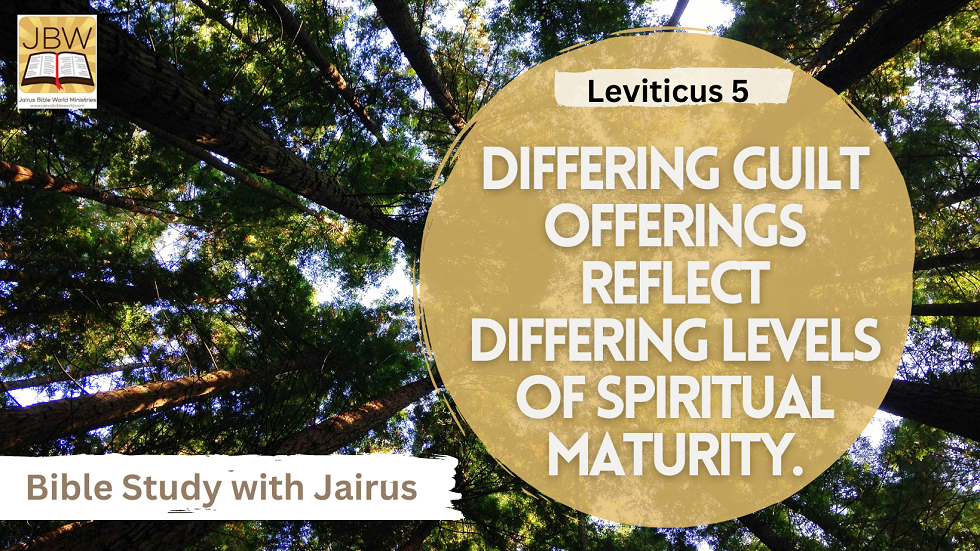 In Leviticus 5, the Israelites were instructed to bring a guilt offering in the following circumstances:

Each offering was handled in a unique way. The lamb was slaughtered by the person who offered it (Leviticus 1:11; 4:24). This represents that more mature believers must actively participate in the preparation of their sacrifice.

Meanwhile, those who offered birds had the priest’s assistance. The priest twisted the birds’ necks without severing them. This represents relatively new believers who need the help of spiritually mature people as they offer their sacrifices. These new believers are still not yet free from the connection between the soul and the natural old man, just like the head is not completely severed from the body.

The tenth of an ephah of fine flour reminds us of the sacrifices of spiritually immature people. Unlike the lamb and dove, this offering was not a blood sacrifice. This reminds us that those who do not know or believe in God are held to a lower standard. They are only required to act according to conscience (Romans 2:15). However, those who do know God must act in accordance with His law and righteousness.

The outer courtyard represents our distance from God. The farther we are from him, the lower is His standard of us. Conversely, the closer we are to God, the higher is His standard in our spiritual lives. The chapter concludes by stating that if someone sins intentionally and acts unfaithfully, he has only one option for a sacrifice: a ram. There is no other choice (Leviticus 5:15).[1] Since these Israelites did know God, were aware of his laws, and yet chose to disobey, they had to offer a larger sacrifice to atone for their sins. This seems to confirm the principle I mentioned above: the greater your knowledge of God, the more you will be held accountable for disobedience.

What is the difference between a sin offering and a guilt offering?

At times, Biblical authors seem to include guilt offerings as a subset of sin offerings. Other times, the Bible differentiates between the two. Let me share my understanding of these two offerings.

I believe the sin offering deals with outward sinful behavior, while the guilt offering deals with our inner disposition. I’ll give an example to illustrate. For example, if a person touches a three-foot-tall poisonous plant, he or she will suffer the consequences. This represents the sins we committed before we believed in the Lord: murder, arson, or adultery. When we believe in Christ, it’s as if we cut off the plant at ground level. This is what the sin offering accomplishes: cleanses us of past actions.

But the root is still there, and it will grow inch by inch. This is when guilt offerings come into play. The guilt offering covers the small transgressions, which are a manifestation of the larger poisonous root within. The poisonous plant may be only one inch tall, but its roots are still large. If you do not deal with it when it is still very small, it will grow into a greater sin – from transgression to sin. In such a situation, you need to offer a guilt offering and a sin offering to obtain redemption.

For example, one Christian lady said that when she and her husband are convicted about having a bad attitude toward their children, they quickly try to correct it. If they don’t correct it immediately, but only let it fester, the bad attitude turns into worse sins. They go ballistic and lose their temper with their children. They have committed a more significant sin. When they first noticed their bad attitude, they needed a guilt offering; now they need both a sin offering and a guilt offering.

It may seem that the guilt offering deals with small things, but it actually deals with the root within. For example, Jesus said, “Everyone who looks at a woman with lustful intent has already committed adultery with her in his heart.” (Matthew 5:28). We may not have committed adultery yet, but we have an adulterous heart, which is sinful in the eyes of God.

In the same way, the offenses recorded in this chapter seemed small. They were unintentional sins such as refusing to testify in court; touching unclean things (such as animal carcasses); touching human uncleanness; uttering a rash oath. However, if these transgressions were not dealt with in time, they would become more serious. Like yeast, they would spread through the whole batch of dough.

The guilt offering dealt with situations where sin was still in its infancy. If someone touches a carcass of an animal without noticing it, he is still guilty (vs 2). However, if a person touches human uncleanness or utters a rash oath, he will not become guilty until he notices what he did (vs. 3-4). In other words, the one who does not know is not guilty. Once he realizes what he did, he will be guilty. Why? When you are unaware of your sin, you are still in darkness; but when you realize what you did, you are enlightened by God. Once you are enlightened, you must repent.

Let’s look in detail at the guilt offerings required by God.

The first guilt offering mentioned is a female lamb or female goat. The passage clearly mentions that these offerings are sin offerings (Leviticus 5:6). According to Leviticus 1 and 4, anyone who brings a lamb as a sin offering must come before the priest, lay his hands on the lamb’s head, and slaughter it before the priest as a sin offering. The priest shall put the blood on the horns of the altar of fragrant incense and pour it out at the base of the altar. Meanwhile, its fat must be burned on the altar. In our study of Leviticus 1-4, we have analyzed the meaning of these sacrifices in detail. In short, the larger the sacrifice, the wealthier the individual. The larger sacrifices represent greater spiritual maturity. The more mature individuals had to take initiative in helping contribute to the sacrificial process, such as the slaughtering of the lambs or bulls.

God has lower standards for those who are less spiritually mature or less financially capable. Those who could not afford a lamb could offer two turtledoves or two pigeons. The priest should wring the bird’s neck, but not sever it completely. Why is this so? In Genesis 15, Abraham was commanded to sacrifice a heifer, a female goat, and a ram, each three years old, along with a turtledove and a young pigeon. The mammals were cut in half, but the birds were not (Genesis 15:10). I believe that large animals like bulls and lambs represent the offerings of mature believers, who must take more initiative in applying the work of the cross to their lives (represented by cutting up the animals). However, the small offerings represent the less mature. They are not required to take as much initiative. The effect of the cross is the same, but God’s standards may be different.

For example, we hold new believers to different standards than we hold mature Christians. Similarly, the closer we are to God, the higher is His standard for us. He has lower standards for those who are far away from Him. As long as they are willing to accept Jesus as their friend and are willing to turn to Him in their hearts, He accepts their offerings, such as prayers of repentance and desperation after gambling or taking drugs. They are very limited offerings, but He accepts them. When we are more united to Him, His standard is higher.

Why can’t the head of the bird be severed completely? Let’s look at this verse metaphorically. If we are spiritually immature, our natural fleshy life is often stronger. If our spiritual life is not strong enough to live by faith or by the word of God, then we still need the supply of natural life. A spiritually immature person only needs to offer a relatively small sacrifice. He does not need to slaughter the bull or lamb himself. In other words, the more spiritually mature you are, the more faith God requires from you.

If an Israelite is so poor that he can’t afford a bird, he can offer a tenth of an ephah of fine flour as a sin offering. This is a sin offering, not a grain offering, so he should not put frankincense and oil on it (Leviticus 5:11). A handful of it is for the memorial portion; it will be burned as an offering made by fire. The remainder shall be for the priests. These laws resemble the instructions regarding birds, but they are adjusted to the needs of the poorest people. No matter how poor a person is, he must give a burnt offering to God. When offering a burnt offering, the worshiper must give a portion that is offered completely to God and burned to ashes. Whether we are rich or poor, God will forgive our sins. But we must draw near to him, trust his sacrifice, give thanks, and worship Him.

The closer to God, the higher his standards

The closer we are to God, the greater capacity we have to harm him and break his heart. The more united we are with God, the more likely we are to taint our fellowship with Him because of our sins and flesh. God wants to restore that fellowship.

A person who sinned intentionally and was unfaithful to God had only one choice: offering a ram without blemish (15). He made restitution for the holy thing that he had harmed, and he added a fifth of its value to the payment (16). Even a person who sinned unknowingly was guilty. He would bring a ram as a guilt offering and the priest would make atonement for the mistake so he could be forgiven (17-19). The more we know God, the higher are His standards for our lives.

These chapters of Leviticus can be difficult to understand, especially when we are distracted by our own logic and traditions. Is God hiding something from us? Pastor Bill Johnson once said, “God does not hide things from us. Rather, He hides things for us.” It’s like an Easter Egg hunt in the United States. The parent or grandparent hides some eggs in easier spots so that the younger children can find them more easily. But he or she hides other eggs in more difficult places to provide a challenge for the older children. He or she provides more hints for the younger children to help them find the Easter eggs. Not only do the children have fun finding eggs, but the parent also feels very happy.

These hints are like these different offerings. For those who are less mature, God provides a low bar and many hints along the way. The more spiritually mature you are, the higher God sets the bar. He sometimes conceals his truths and makes us pay a price as we search for him. The Bible says that “It is the glory of God to conceal things, but the glory of kings is to search things out.” (Proverbs 25:2). When God hides himself, he gives us hints to help us find him. We will surely find God if we seek Him with all our hearts. When we do, God is pleased, just like the parent is pleased when his children find the Easter eggs he hid.

Therefore, the differences in these offerings hint at God’s nature. God has different demands and provisions for people with different levels of spiritual maturity. The more we realize God’s kindness and tenderness to our weakness, the more we can understand His will. Let’s not shy away from passages like this because we are afraid we won’t understand. Instead, let’s search harder, and we will surely find God.