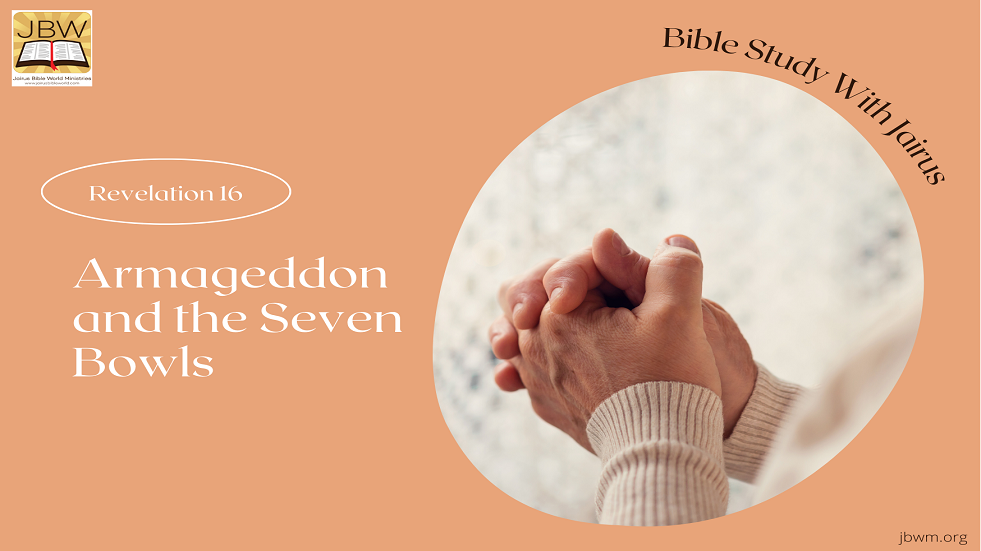 Armageddon and the Seven Bowls

Have you ever scratched your head when you read about the seven bowls of God’s wrath in Revelation 16? Have you wanted to better understand the pictorial and prophetic imagery of the bowls? Have you wondered about the Battle of Armageddon which takes place between the sixth and seventh bowls?

The imagery of the seven bowls and the battle of Armageddon reminds me of the picture that is painted in Genesis 15, which records God’s promise to Abraham. God told Abraham that his descendants would go to Egypt and be enslaved for 400 years. On the one hand, they were waiting for the iniquity of the Amorites to be complete; on the other hand, they were accumulating strength and growing into a huge army. In the end, the Amorites did not repent, and God judged them by the hand of the Israelites.

Revelation 16 paints the same picture: God is merciful. He is waiting for people to repent. He is also waiting for the church to accumulate enough power. God will eventually judge wicked people and evil spirits through the church. This will happen at Armageddon after the time has come and after the iniquity of mankind is complete.

Understanding the imagery of the bowls

For example, how should we understand the pictorial language of Psalm 56:8, “You have kept count of my tossings; put my tears in your bottle. Are they not in your book?”[1] How do we understand the bottle that David speaks about? David clearly said that God collects our tears in a bottle. Is the bottle physical or spiritual? Does God really collect our tears in a bottle, or it is just a metaphor?

I believe this is a real bottle, not a metaphor. After the Lord Jesus was resurrected, He appeared to his disciples. The disciples “thought they saw a spirit” (Luke 24:37). The word “spirit” in the original language is “pneuma” (Newma), which signifies a non-material spirit. The Lord Jesus rebuked the disciples for doubting, asking them to touch His hands and feet. The Lord said, “A spirit does not have flesh and bones as you see that I have.” (Luke 24:39). After that, the Lord asked them for something to eat. They gave the Lord a piece of a broiled fish, and He ate it (Luke 24:41-42). This story shows that the resurrected body is not only spiritual, but also material. The material, resurrected body absolutely exceeds the material body here on earth. The spiritual realm of the resurrection may contain physical objects that are even more substantial than the material objects we have now. So looking at this story, the Heavenly Father’s bottle may be a real bottle that can hold our tears.

Let’s look at another example of pictorial language, the Golden Censor. Revelation 8 mentions, “Another angel came and stood at the altar with a golden censer, and he was given much incense to offer with the prayers of all the saints on the golden altar before the throne, and the smoke of the incense, with the prayers of the saints, rose before God from the hand of the angel. Then the angel took the censer and filled it with fire from the altar and threw it on the earth, and there were peals of thunder, rumblings, flashes of lightning, and an earthquake.” (Revelation 8:3-5). These verses show that the function of the golden censer is to collect the prayers of the saints. As the smoke of the incense ascends, the prayers collected by the angels will also ascend to God.

Why are there seven bowls? To understand this passage, we must understand the language of numbers. What does the number seven signify in the Bible? This number may have a lot of meanings, but we will only share one or two here. According to the Genesis record, God created the world for six days and rested on the seventh day. Seven is a complete number, representing a complete period. There are seven days in a week. Seven signifies a complete phase or period. It also signifies increasing quantity. The seven bowls of God’s wrath must contain a sevenfold portion of His wrath.

These seven bowls represent the gradually increasing wrath and judgment of God. After the fourth bowl was poured out, the Bible specifically says that “they were scorched by the fierce heat, and they cursed the name of God who had power over these plagues. They did not repent and give him glory.” (verse 9). They didn’t repent, so God’s judgment and wrath continued to intensify. After the fifth bowl was poured out, people gnawed their tongues in anguish and “cursed the God of heaven for their pain and sores. But they did not repent of their deeds.” (verse 11). You see, if we continue to be unrepentant, God’s wrath will continue to increase.

A vision appeared between the sixth and the seventh bowls. Three demons gathered in a place called Armageddon and brought the kings from the east to fight against God and His chosen people. This occurred after mankind’s sins had reached their full measure. Under the influence of the three evil spirits, the kings united to wage war against God and His chosen people. This is what Armageddon means – the final battle between light and darkness in the last days.

Understanding the imagery of Armageddon

God’s appearance to Abraham in a vision in Genesis 15 is a picture that helps us understand Armageddon. In Genesis 15, the Lord gave Abraham a vision and said to him, “Know for certain that your offspring will be sojourners in a land that is not theirs and will be servants there, and they will be afflicted for four hundred years. But I will bring judgment on the nation that they serve, and afterward they shall come out with great possessions.” (Genesis 15:13-14). Then the Lord said again, “They shall come back here in the fourth generation, for the iniquity of the Amorites is not yet complete.” (Genesis 15:16).

Why did God tell Abraham that his descendants were going down to Egypt? For one thing, Abraham’s family was small and weak. He only had one child, Isaac, and his other son, Ishmael, was unacceptable in the eyes of God. Although Abraham had some servants, there was no way he and his one son could completely conquer the land of Canaan by themselves. When Jacob led his family to Egypt, there were only 70+ people. They did not have enough strength to conquer the land of Canaan.

However, while the people were slaves in Egypt for 400 years, they continued to multiply in numbers. It is estimated that there were 3 million people (more than 600,000 soldiers, besides women, children, and old people) by the time the Israelites came out of Egypt. They had become a great army. They were able to conquer the land of Canaan.

In addition, the sins of the Amorites were not yet complete, so God gave them at least 400 years of opportunity to repent. But after 400 years, they still would not repent. The bowl of God’s wrath was filled up and His wrath was poured out. He commanded the Israelites to destroy all the Canaanites.

Many people do not understand the historical background of this judgment, and they think that God was too harsh in judging the Canaanites. But when we understand the context, we see that the window of opportunity for repentance and mercy had closed. The Canaanites’ iniquity was complete, so God’s wrath and judgment were carried out on them through the Israelites.

God is like a judge. When a judge sentences a thief to ten years in prison, he doesn’t leave the judge’s bench, pull out handcuffs, and take the thief to jail. That’s the job of the bailiff. The Israelites acted as bailiffs in the Old Testament. God said clearly to the Israelites, “You shall devote them to complete destruction, the Hittites and the Amorites, the Canaanites and the Perizzites, the Hivites and the Jebusites, as the Lord your God has commanded, that they may not teach you to do according to all their abominable practices that they have done for their gods, and so you sin against the Lord your God.” (Deuteronomy 20:17-18)

Similarly, in the New Testament age, we as Christians play the role of the bailiff. We are destined to judge angels. Paul said in 1 Corinthians 6:3, “Do you not know that we are to judge angels?” Angels were created to be “ministering spirits sent out to serve for the sake of those who are to inherit salvation” (Hebrews 1:14). We as humans were created in God’s image, and we will one day be reborn as children of God (Romans 8:14). In other words, our destiny is to become princes. Angels will be our “Imperial Preceptors” who will help us become princes.

But since some angels betrayed us and tempted us into sin, God will judge them. God will use us, the bride of Christ, to execute judgment on the angels. As believers, we fight against evil spirits in the heavenly places (Ephesians 6:12). In the end, God will use us, the church, to judge the evil spirits and the sinners. Judgment is from God, but God uses our hands to judge the sinners. The Battle of Armageddon is the final battle between the Bride of Christ and the enemy. God and His chosen people will be victorious.

God is giving humans the opportunity to repent and turn to Him. He is also giving the church time to gain strength.

The goal of God’s judgment is repentance. God sent a famine on the land of Canaan to encourage the Canaanites to repent, but they did not. God sent the fourth and fifth bowl judgments to draw people to himself, but people refused to repent. As a result, the sixth bowl was poured out and the final battle of Armageddon erupted.

God’s judgment is only a means to an end: repentance. When people do not repent, judgments intensify. Whether it is the famine in Canaan, the ten plagues of Egypt, or the coronavirus today, the goal of God’s judgments is to make people repent. Yet many people still curse God and refuse to repent. Therefore, God’s judgment will intensify.

As the Church, we should take advantage of the difficult environment we are in and use it for growth. The people of Israel multiplied greatly during their time in Egypt. In the same way, God has given us an opportunity to accumulate strength, multiply, and become firmly rooted in Him. We must seize this opportunity to prepare ourselves for spiritual maturity so we can win the war that lies in the future.