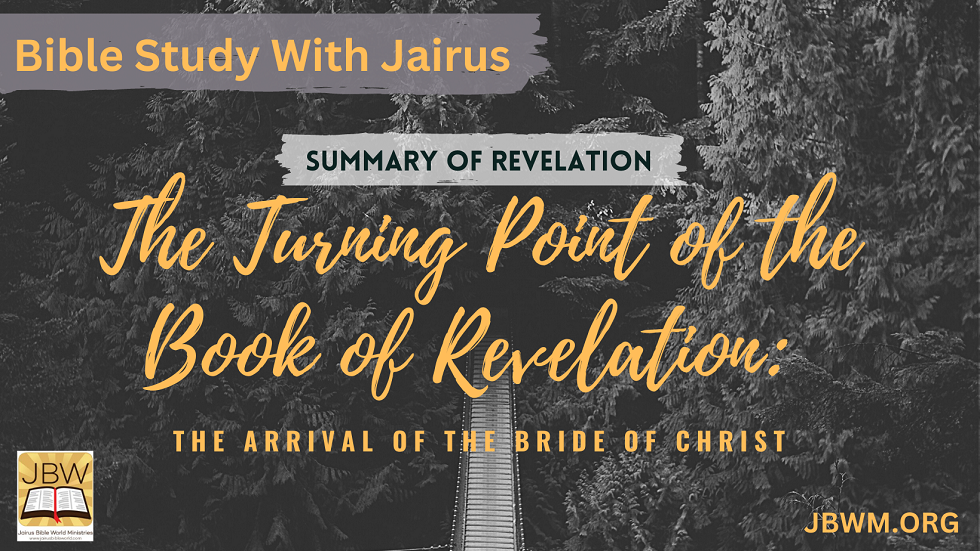 The Turning Point of the Book of Revelation: The Arrival of the Bride of Christ

The purpose of Revelation is to produce the bride of Christ. When the bride of Christ arrives, Jesus Christ and His Bride will have a wedding feast (Revelation 19). Ultimately, God will judge Satan, evil spirits, and sinners, and cast them, along with death and Hades, into the lake of fire. But until this ultimate mission is accomplished, the negative experiences of judgment exist to help the church spiritually mature and become the bride of Christ. This is what Paul said in Romans 8:28: “For those who love God all things work together for good.”[1]

Chapter 12 is a turning point in the book of Revelation. Before Chapter 12, God is judging the church to bring about its maturity. However, after Chapter 12, the church begins to judge the fallen angels and evil spirits. The Bible says, “Do you not know that we are to judge angels?” (1 Corinthians 6:3). The overcoming bride of Christ (represented by the woman and the male child) will judge angels on behalf of the church. The battle becomes fierce, and the final tribulation begins.

Before his rebellion, Satan’s mission was to lead all things to worship God. Later, he rebelled against God and failed to fulfill his mission. God created human beings to replace Satan as the ones who would lead others to worship God. Although Satan tried to tempt man and destroy this purpose, the bride of Christ ultimately triumphs over Satan’s temptation. Conquering believers are well qualified to judge Satan and evil spirits.

In Revelation 12, the bride of Christ arrives on the scene. The bride gives birth to a male child (the overcoming believers). To fight against them, Satan’s persecution becomes intense, and the tribulation begins. During the tribulation, the battle between Christ with His bride and Satan with his prostitute continues. In the end, Christ and His bride will win the ultimate victory, ushering in the end of the age. This is the summary of Revelation.

The Cycle of Seven in The Bible

Seven is a very important number in the Bible. It reveals the way God has arranged the universe. God created everything in six days, and on the seventh day, He rested. Similarly, he has invited his people to work for six days and to rest on the seventh day (Genesis 3:19).

This cycle of work and rest points to a greater truth. When man first sinned and rebelled against God, they lost their rest in Him. Now, we must accept six days of God’s discipline as we learn obedience through suffering. We then hope to find His rest on the seventh day.

This continuous cycle of seven is the basic structure of life. The Old Testament not only teaches us to rest every seven days, but also every seven years. The Israelites were permitted to sow their fields for six years, and in the seventh year, they were commanded to rest. This is yet another example of the cycle of work and rest. It points to the fact that God will lead his people to find rest.

Daniel’s vision concerning the fate of the Israelites also contained seventy “sevens.” Seven “sevens” represented the time it took to rebuild Jerusalem. Sixty-two “sevens” described the time from when Jerusalem was rebuilt to the time the Messiah was killed. These events have already happened. The last seven represents the last seven years mentioned in the book of Revelation. The next time period, which lasts three and a half years, is the great tribulation. But there is a long period between sixty-two “sevens” and the last “seven”, which biblical scholars call the “Age of Grace.” No one knows how long this period lasts, but we know it will be a continual repetition of seven days (Sabbath), seven years (Sabbath years), and 49 years (Year of Jubilee).

The Cycle of Seven in The Book of Revelation

The basic structure of the book of Revelation contains several sets of sevens. Let’s look at seven of those!

Third, the Lord Jesus is the High Priest, who walks among the golden lampstands to trim the wicks and add oil. The seven spirits and the seven stars represent the oil and fire in His hands, so they are all manifestations of the Holy Spirit. The Bible speaks of the Holy Spirit as both oil and fire. When we barbecue, we use both firewood, lighter fluid (oil) and a spark of fire to ignite the wood. The spark will turn into fire, and the fire will ignite the fuel and the firewood, which will make the fire stronger. The spark, the fire, the oil, and even the wood (a representation of our sacrifice) are united in purpose. In the same way, the Holy Spirit is the spark that ignites our love, the oil that fans it into flame, and the wood that keeps our passion burning (2 Timothy 1:6). This is why I believe the seven spirits and the seven stars are two aspects of the same Holy Spirit.

Let’s examine a few seals in detail. The Gospel (represented by the white horse in the first seal) may be the purifying fire that refines the church in Ephesus. The church in Ephesus had left its first love. Once a church stops preaching the gospel, it will be filled with infighting and internal friction and will gradually lose sight of its first love. Meanwhile, a church that zealously preaches the gospel will often be full of love for God.

Jesus’ letters to the seven churches are assessing and diagnosing the seven churches, measuring their spiritual temperature and symptoms to determine the correct remedy. The seven seals are the remedies to deal with the unique and varying problems of the seven churches. I had never noticed this connection before. It was only during our recent Bible study that I received this inspiration from the Holy Spirit. There is no way that Jesus would have mentioned the problems of the churches without providing a solution to the problems in the following verses. Our Lord is a Lord of provision. He not only informs us of our problems but also provides solutions to our problems.

The book of Revelation can be divided into two parts. Before chapter 12, God helps the church mature through various judgments; after chapter 12, the mature Bride of Christ continues to fight against the enemy and eventually judges fallen angels and evil spirits.

After the seven bowl judgments, the book of Revelation depicts the destruction of Babylon, the marriage supper of the Lamb, the battle of Armageddon, the imprisonment of Satan, the coming of the millennial kingdom, the last rebellion of Satan, the Great White Throne judgment, the New Heaven and New Earth, the New Jerusalem, etc. At this point, God’s judgment is finally complete. Death and rebellion are cast into the lake of fire, and believers reign with God forever and ever. This is the ultimate seven, which is the reality that the Sabbath, the Sabbath year, and the Year of Jubilee point to. It is also the end of human history.

Although I discussed seven sevens in this article, there may be even more sevens in the book of Revelation. The Bible is full of continuous cycles of sevens. Human history is not limited to a linear timeline of 7000 years. Instead, our history culminates with the ultimate Sabbath, an eternity of rest and completion.