Dreams About Japan: An Airplane from Japan 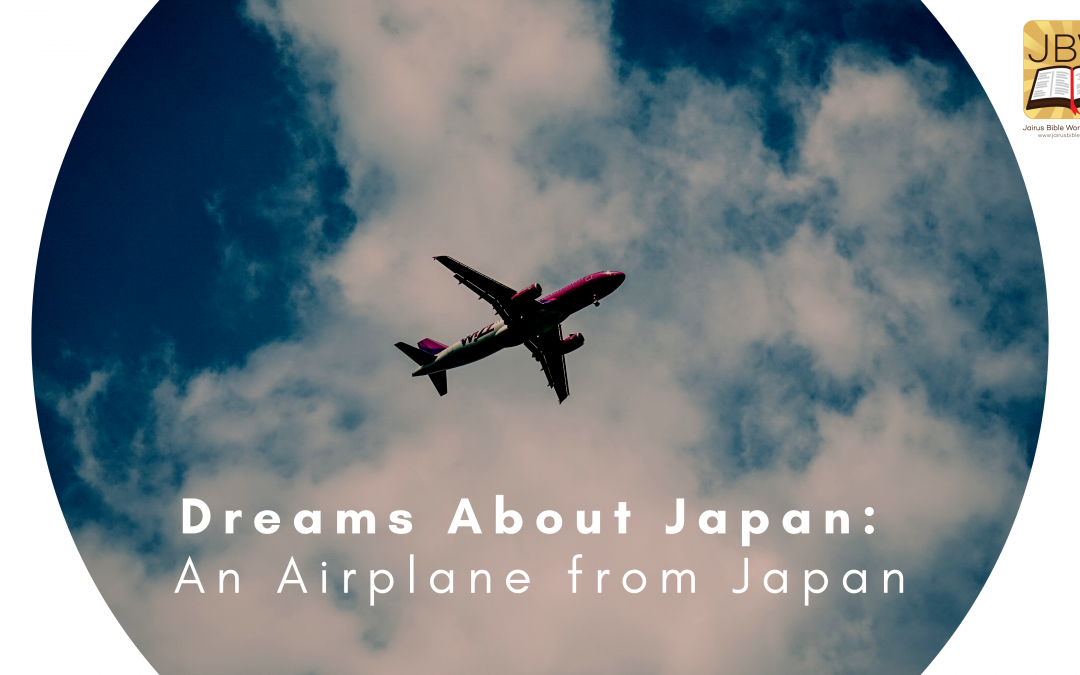 Before I woke up in the morning, I saw a plane coming from Japan to my home town in China. I saw the airplane pass through a cloud and come directly to my childhood home in China. My home town is close to the capital, 400 kilos south of Beijing. The door of my home faces east and I came out of my door to give the airplane a signal and I opened up the door to allow the light to shine through so the airplane could see where I was standing.  Then the lamp in front of my house started to blink like a car light is blinking during left turn or right turns.

One way that the Lord speaks to me in prophetic dreams is by using the places where I lived in the past. One of these places is my rural hometown in China, where I lived as a child. God often uses my house in my hometown in China to represent the entire country. The same is true of this dream. Later, I will describe in detail my house and my hometown, as well as the many prophetic dreams about China’s great revival that God told me about by means of my childhood home.

My hometown is on the westernmost side of the village. The door faces a main road in the village. The road is called “Qianjie” which means the “front street”. In this dream, I stood at the door and saw an airplane coming from Japan when it was almost dawn. The airplane was a passenger aircraft usually used on international flights.

In real life, there is no light on the east door of our house because we live in the village. In the United States, lights are installed on the garage or in front of the door. But there are no lights on the door of my rural home in China. However, in my dream, there was a light that flashed like a signal light. These lights were not ordinary lights, but signal lights. It flickered, so I stood at the door to send a signal to this plane.

From this dream, my inspiration is that the future revivals of China and Japan are somewhat related. In other words, the revival may start in Japan and then spread to China; or perhaps after the great revival comes to China, it will lead to Japan’s revival.

In another prophetic dream, I was taken in spirit to go fishing in Japan. (Fishing often represents evangelism.) There, I met the Lord Jesus. I believe that God has a great burden for Japan. In 2016, God confirmed to me that China will have a great revival and this revival will spread to the world through a prophetic meeting in the United States, as well as through Chuck Pierce’s book and information.

In January 2016, I went to Oregon, USA to attend a prophetic meeting, seeking God’s word to heal my wife’s fertility problems. Before I went, I read a book called God’s Unfolding Battle Plan: A Field Manual for Advancing the Kingdom of God by Chuck Pierce. This book mentions that the Lord once told him that China will have a great revival in the future and it will spread all over the world. Chuck Pierce was one of the speakers at the meeting I attended. At the meeting, he repeated that the Lord had visited him in the 1980s and told him this story.

After returning to Washington DC, I was walking down the street one day. Suddenly, I heard the Holy Spirit ask me, “What is a great revival?” I said, “I heard that one tenth of Chinese people are Christians. Isn’t this already a great revival?” I said this because I was saved overseas. I’m not familiar with the Chinese church, and I also don’t have a burden to spread the gospel in China. My burden at the time was to spread the gospel to Chinese who already live overseas. But the Holy Spirit asked me, “How about two out of ten?” I could hear the voice of the Holy Spirit very clearly. I was shocked, because at least 100 million people would be saved. Since then, I have been burdened to share the gospel in China, and the Lord has also begun to tell me about China’s great revival in the future through prophetic dreams. A prophet also prophesied that one day, God will lead me across China to preach the gospel. This prophetic dream is one of those dreams that talks about the relationship between China’s revival and Japan’s revival. The time of the prophetic dream was in the early morning, when the darkness was about to pass away, and the sun was about to come out. This represents the revival that is coming. There is a lot of darkness in China and Japan, but God wants to bring the early morning sunlight, allowing many people to walk out of the darkness and into the light.