Dreams About Japan: Farming with my Grandfather 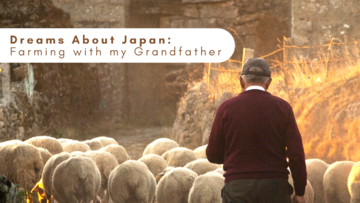 In this dream I was with my Grandpa and he asked me to help plow the field in our farm.  I went there and discovered it was carried out by man power exactly how the Chinese used to farm in history. But I found in the neighboring field, people were using livestock to carry out the plowing work. I told my grandfather, “I am tired, and I am not that strong either. So, can we ask the guys with livestock to help us?” With no objection from my grandfather, I went to a store front and found that they had tractors and other machines for rent. I went in the building and my grandfather followed. I took out my credit card to pay for it but before I paid, my grandfather gave me a certain look. I felt that he wanted to pay but still waited for me to pay it first so I handed my credit card to the cashier. The cashier told me after, “Your land has a specific issue. It is by the road and the tractors cannot turn easily. Because of this it requires moving the tractors to the neighboring land but many times the owners of the neighboring land will not allow it.”

He turned us down even when we planned to pay him. Then I asked them, “What we should do?” But they did not tell me. Then I asked my grandfather, “are we supposed to wait here?” My grandfather said no so we left.

I recalled when I took my credit card, the name on it was a Japanese name. This gave me a strong impression in this dream. I thought I might have taken the wrong card and I was supposed to pay for it myself. So, I went to find the Japanese person who owned the credit card and explain to him what had happened. I told him I would deposit some money to his account to pay him back, but he did not say anything about it. I believe we eventually paid for the service.

The grandpa in this dream is not my own grandpa, but a representation. My grandfather himself is not a Christian and he was not saved. This grandpa may represent the old way of doing things. He took me to plow the field, using an old method. Even though my suggestion required less effort than Grandpa’s method, it is also an old method. Using oxen to plow is easier than plowing by hand. In this prophetic dream, I may represent a new generation of Christians seeking God’s help to preach the gospel in Japan. But in the process of seeking help, I saw people who were doing mechanical cultivation. Mechanical cultivation here represents God’s power. Plowing represents preparation of people’s hearts. Perhaps the meaning of this picture is that we should pray for God to help us open our hearts and prepare to plow so that God’s gospel can be widely spread.

The land is by the roadside. Perhaps it represents the hardened hearts of the people on being trampled on the roadside. What the cashier said to me was interesting. He said: “Your land has a specific issue. It is by the road and the blades of the mechanical plow cannot turn easily. Because of this, you need to move the plow to the neighboring land. But many times the owners of the neighboring land will not allow it.”

This is very interesting. It’s important to understand that the government sub-divided farmland and divided them among farmers. The farms in China are often very small.

In my other prophetic dreams, I saw a lot of shocking events happening to the world and to China. In one prophetic dream, I saw an angel stretching out a big stick from the sky all the way to the ocean. He began to stir the ocean. I saw the ocean waves churning, causing many houses to be destroyed. But I miraculously swam away to safety.

In many of my prophetic dreams, I was miraculously taken to China to observe various tumultuous situations that would occur. After the turmoil, I found that the gospel had been preached with a greater effect. God will one day allow shocking circumstances to come to countries such as China, North Korea, South Korea, and Japan, to shake them up and get them ready for revival. Sin and evil spirits will be judged, and people’s hearts will be prepared. These tumultuous circumstances work is like a big plow. They are not working in a small corner, but in the entire East Asia region.

After I left, I found that the name on the credit card I was using was a Japanese name, which left a deep impression on me. The mysterious Japanese has always been with us. I think this represents that God has prepared salvation for the Japanese people in Christ. My credit card was rejected, but the credit card with the Japanese name on it was accepted. Credit cards in the United States are often used to print boarding passes at airports, thus they are often used as a representation of a person’s identity in prophetic dreams. So maybe God wants to tell us in this picture that He has borne all the sins of the Japanese people in Christ. He has paid their debts and desires to save them. We know that the Japanese people committed a lot of crimes during World War II. These crimes are, of course, too numerous to record. But God still loves them and wants them to confess their sins and repent and accept the salvation of Christ. The inspiration that I received from this prophetic dream is that God gives me prophetic dreams so I can know His love towards the Japanese people.

Note: Please understand, unlike the independent nature of the farms in America, Chinese farms consist of a small piece of land next to other peasants’ farms. They belong to the state, but the Chinese farmers have the right to use them. In Chinese villages, different types of land were distributed evenly to the villagers according to the number of people in their families. I’m explaining this so that readers have context about a neighboring farm mentioned in my dream. When reading this part think of it as another small piece of land as the farms are often are small and segmented.