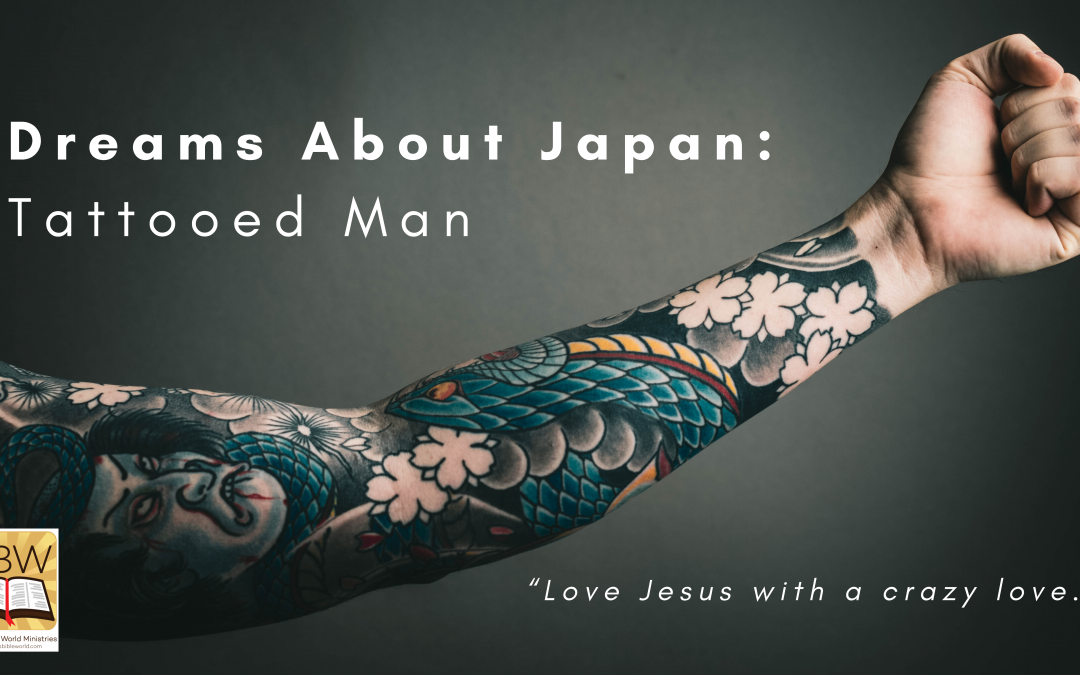 In this dream I saw a Japanese man with tattoos on his body; the tattoos read something like “Love Jesus with a crazy love.”

This is a very simple dream, but it conveys a very deep picture.

Tattooing was originally something that marginalized people liked to do. Later, it grew in popularity. But even now, not everyone wants to get a tattoo. There are many people who have tattoos in the United States. Even people in American Charismatic churches have tattoos. But in mainstream Christianity, people still don’t accept tattoos. Therefore, tattoos in this prophetic dream may represent Japanese people who are living in sin or don’t know God.

But I saw the words “Crazy love for Jesus” tattooed on his body. I don’t remember whether the tattoos I saw were in Chinese, English or Japanese. We often have such experiences in prophetic dreams. When you see some words or hear some language, you don’t seem to understand it on the surface. But strangely, your spirit understands what it’s about.

I believe that Trump was chosen by God. Many prophesied that Trump would be re-elected, but Trump has not currently been re-elected. Some prophets began to repent and apologize for their false prophesy about Trump’s reelection. Some other prophets said that God did say that Trump would win and that the fight is not over yet. Many people hope that God will miraculously intervene and oust Biden, and that Trump will come to power. After that, some Christians hope that the whole world will know that God does exist. The American prophetess Kat Kerr is an example of the latter kind of prophet. She firmly believes that God will intervene, and that Trump will eventually win. She said that God took her to the future and showed her a scene of people rushing to the streets to celebrate Trump’s return to the White House. Many people have confirmed this statement through prophetic visions and dreams.

No matter what the outcome is, there is one thing of which I am quite sure. Trump’s election is not just about him or about American politics, but about the coming of a great revival. Whether Trump is elected is just the tip of the iceberg, the front lines of the struggle. The real spiritual battle concerns a great revival that the enemy is trying to prevent God from releasing. Did God choose Trump so that the United States could have a Christian-friendly political environment? What is the most effective context for the revival of the church and the spread of the gospel to all the countries of the world?

Many leftists and politicians opposed Trump. Some American churches and Christians also joined the opposition. Many other countries and foreign leaders took sides against Trump. I have never seen so many people all over the world hate a person the way they hated Trump. What is the reason for this? Is Satan trying to hinder God’s plan and incite people to hate Trump? We know there is a spiritual battle happening all around us, and Christians should do their best to understand how to join God’s work in the world.