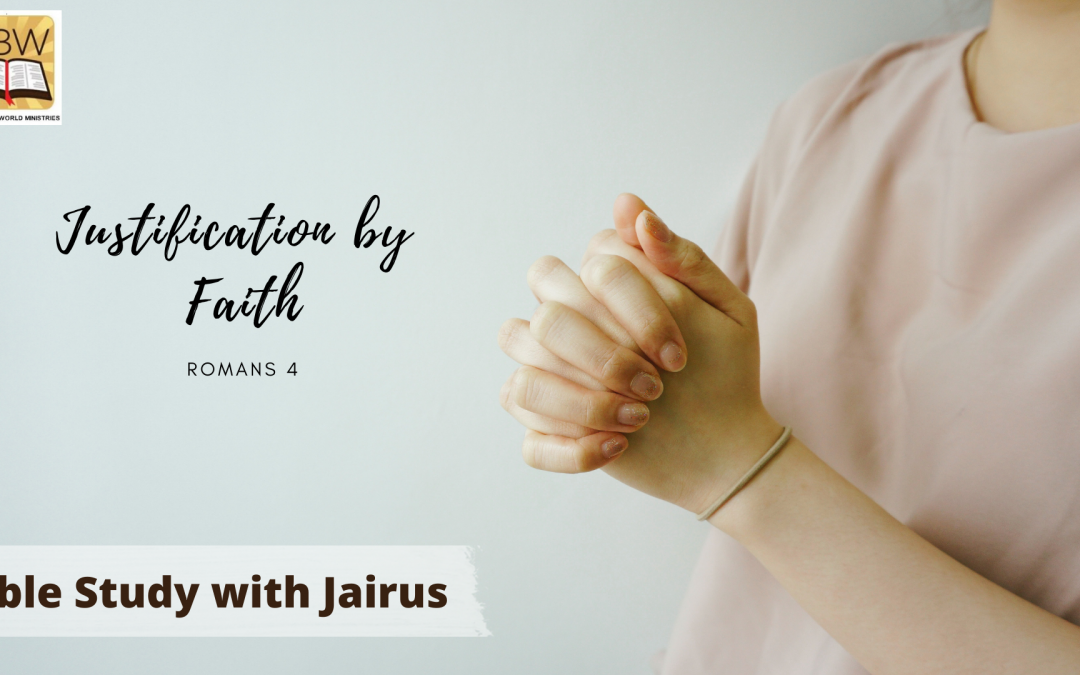 In Romans 4:5-8, Paul says, “And to the one who does not work but believes inhim who justifies the ungodly, his faith is counted as righteousness, just as David also speaks of the blessing of the one to whom God counts righteousness apart from works: ‘Blessed are those whose lawless deeds are forgiven, and whose sins are covered; blessed is the man against whom the Lord will not count his sin.’” (ESV)

In this passage, Paul quotes Psalm 32 and Psalm 51. Both Psalms were written by David after God forgave him of his sin with Bathsheba. Psalm 51 focuses on repentance while Psalm 32 focuses on gratitude.

When New Testament authors quote the Old Testament, there are often some small variations between the Old Testament text and the New Testament quote. For example, Psalm 32:1-2 says: “Blessed is the one whose transgression is forgiven, whose sin is covered. Blessed is the man against whom the Lord counts no iniquity, and in whose spirit there is no deceit.” (ESV) Paul’s quotation omits the phrase, “in whose spirit there is no deceit.”

In addition, there are some translation differences between the two quotations. For instance, where the Psalm says “LORD (Jehovah),” most translations say, “the Lord.” Only some versions such as the Darby Bible and ASV still translate it as “LORD (Jehovah).”

How does David’s experience prove Paul’s argument? We know that David was chosen by God while he was a shepherd. David, the youngest of eight siblings, was tending sheep in the wilderness. When Samuel went to the house of David’s father, Jesse, to find the person God had appointed to be the next king, David was not present. Only after Samuel had met all seven other sons did he ask Jesse about his eight sons. Jesse admitted that he had one more son, who was out in the wilderness.

It seems that David really has no status in the family. Some theologians have speculated that David may have been a child of Jesse’s mistress or even an illegitimate child, since there was so much discrimination against him in his home. This conjecture makes sense. Whereas most families treasure the last child as the apple of their eye, David’s family didn’t even remember that he existed until Samuel asked if Jesse had another son. Later, when David brought food to his brothers at the battle line, David was ridiculed by his own brothers. Clearly, David was devalued within his own home.

We can’t be sure whether this conjecture is accurate. Either way, we know that David lacked status in his family. However, David went through God’s training in the wilderness. In his own words, the Lord was with him. God gave him opportunities to deepen his trust in God. When a lion or bear threatened the flock, God helped him conquer these wild animals. Later, God anointed him as king. After he rose in power, his morals began to weaken. One evening, he was walking on his palace roof when he saw a married woman bathing down below. After committing adultery with her, David murdered her husband.

After this incident, God sent the prophet Nathan to rebuke him, and he immediately repented (2 Samuel 12). The introduction to Psalm 51 records that after Nathan came to see David, David wrote Psalm 51 for the director of music.

Normally, people’s impression of David is that he is quicker to repent than Saul. When Samuel rebuked Saul for offering an unauthorized sacrifice, Saul only quibbled. He did not admit his mistake. Samuel was very angry, saying that rebellion is equivalent to idolatry and that obedience is better than sacrifice. Samuel prophesied that the Lord would take Saul’s kingdom and give it to the chosen person in His heart.

The book of 2 Samuel tells us that after Nathan reprimanded David, he immediately repented. However, Psalm 32:3-4 records a time of hesitation during which David was reluctant to repent: “For when I kept silent, my bones wasted away through my groaning all day long. For day and night your hand was heavy upon me; my strength was dried up as by the heat of summer. Selah” (ESV)

David’s reluctance to repent was very painful for him. No matter when this time of hesitation occurred, this passage gives us an important insight into David’s inner feelings. The longer he waited to confess his sins, the more he felt the pressure of God’s hands on his life.

I can relate deeply to David’s experience. When I was studying in London, England, I heard someone mention the gospel. Suddenly, I began to feel uneasy. I realized I was a sinner. I suddenly felt guilty for many things I did not even previously consider to be sins. It was a very painful experience. I didn’t know where to find relief. I would often browse my computer until midnight before I could fall asleep, and I would wake up suddenly during the night. During that time, I often ran to a nearby park at night, where I cried out with a loud voice to the sky and admitted my mistakes and sins. Even though it wasn’t raining, I felt low air pressure, as if a storm were about to come. I felt out of breath.

Later, when I reflected on this experience, I realized that God’s hands were weighing heavily on me, not allowing me to get by without repentance. Since then, I have repented regularly. After I was baptized in the United States, I have knelt down on the ground every night to pray for repentance. After coming to the United States, I experienced the joy of the complete forgiveness of sins.

David also experienced this powerful spiritual experience of forgiveness. He said in Psalm 32:5-7, “I acknowledged my sin to you, and I did not cover my iniquity; I said, “I will confess my transgressions to the Lord,” and you forgave the iniquity of my sin. Selah Therefore let everyone who is godly offer prayer to you at a time when you may be found; surely in the rush of great waters, they shall not reach him. You are a hiding place for me; you preserve me from trouble; you surround me with shouts of deliverance. Selah” (ESV)

These verses describe David gradually receiving forgiveness and joy as he repented and confessed his sins. These experiences may seem like nothing special to modern Christians, but for an Old Testament saint like David, the feeling of forgiveness was unprecedented. Similarly, Martin Luther felt like forgiveness and justification by faith were a big breakthrough.

In many Psalms, David would begin writing from his human perspective. Then the Holy Spirit would come upon him, and he would speak directly from God’s point of view. This is the case in Psalm 32:8-11. In these verses, the Spirit of the Lord says through David: “I will instruct you and teach you in the way you should go; I will counsel you with my eye upon you. Be not like a horse or a mule, without understanding, which must be curbed with bit and bridle, or it will not stay near you. Many are the sorrows of the wicked, but steadfast love surrounds the one who trusts in the Lord. Be glad in the Lord, and rejoice, O righteous, and shout for joy, all you upright in heart!” (ESV)

David lived a life of purity and loved God’s law. He often boasted about his righteousness and the unrighteousness of others. Yet he committed many violations of God’s commandments with Bathsheba. For example, he broke at least three laws: do not kill, do not bear false witness, and do not commit adultery. David’s sin gave the enemy a great opportunity to discredit David’s God. This defeat was a big blow to God’s reputation.

In American society, many Christians commit sins of adultery. Randy Clark, the founder of Global Awakening and the supervisor of the “Randy Clark Scholars” Doctor of Ministry Program at the United Theological Seminary where I am studying now, admitted his struggle in this area. Though he tried his best to love the Lord, Randy fell into adultery in his younger years. After he his wife betrayed him and sinned against him, he began to be sexually immoral, even to the point of taking drugs. He later mentioned the importance of deliverance ministry in his life. After demons were cast out of Randy, he discovered that his family’s ancestors had committed the same sins. It was then that he realized that he was suffering from a generational curse. After he experienced deliverance, he escaped from this curse, defeating the strongholds set up by the evil spirits. His children became godly people, and none of them have repeated this generational mistake. He testified that his children had never kissed anyone except their husband or wife.

Randy Clark comes from a Baptist background, and he attended a liberal seminary, so he didn’t believe in deliverance. But his experience proved the effectiveness of deliverance. I completed the course in divine healing and deliverance that he offered at his ministry. During this period, I read many books about deliverance. One of these books suggested that David sinned because of a generational curse that could be traced back to his great-great-grandmother, the prostitute Rahab. Rahab was justified by faith and the whole family was saved when she married Salmon, an Israelite spy, and gave birth to the godly man, Boaz. Boaz was the father of Obed, Obed was the father of Jesse, and Jesse was the father of David. Boaz was a very pious man. The Bible doesn’t tell us whether Obed and Jesse sinned sexually. However, the deliverance ministry suggests that David sinned as a result of a family curse. Since Rahab was a prostitute, she interacted with many people. Naturally, she brought in many evil spirits. These evil spirits established strongholds in David’s family. Therefore, although David pursued purity throughout his life, he could not overcome the power of these evil spirits. Thus, he eventually failed.

Of course, this does not mean that David himself carries no responsibility for this act. We should not blame his sin completely on the evil spirits. But we do need to acknowledge the existence of evil spirits and generational curses. In Randy’s case, he realized that demons were involved as he saw a pattern of similar sins in his family. But once he was delivered from these demons, the pattern was broken. Randy explains that there is often more to the story than our own personal sins. We need to confess our sins, but we also need to cast the demons out. Fortunately, Christ has delivered us from the curse through his work on the cross, and deliverance ministries seek to apply that deliverance to daily life.

Not only must we believe that God is able to save us, but we must also admit our own incapacity to save ourselves. Even if our own hard work could make us pure, how would we deal with the sins of our ancestors which still flow in our blood? Our sinful nature needs the blood of Christ and his work on the cross to be removed once and for all.

Although David is an Old Testament believer, many of his experiences can be related to common New Testament phenomena. David experienced moral failure, but he has also experienced God’s forgiveness and possibly the deliverance from demons or family curses. David’s life was like a roller coaster. After the depths of sin and despair, David experienced the heights of joy and forgiveness. In Psalm 32, he sighed in authentic joy: “Blessed is the one whose transgression is forgiven, whose sin is covered. Blessed is the man against whom the Lord counts no iniquity, and in whose spirit there is no deceit.” (ESV) He experienced the joy of “justification by faith” and the deliverance from family curses and demons.