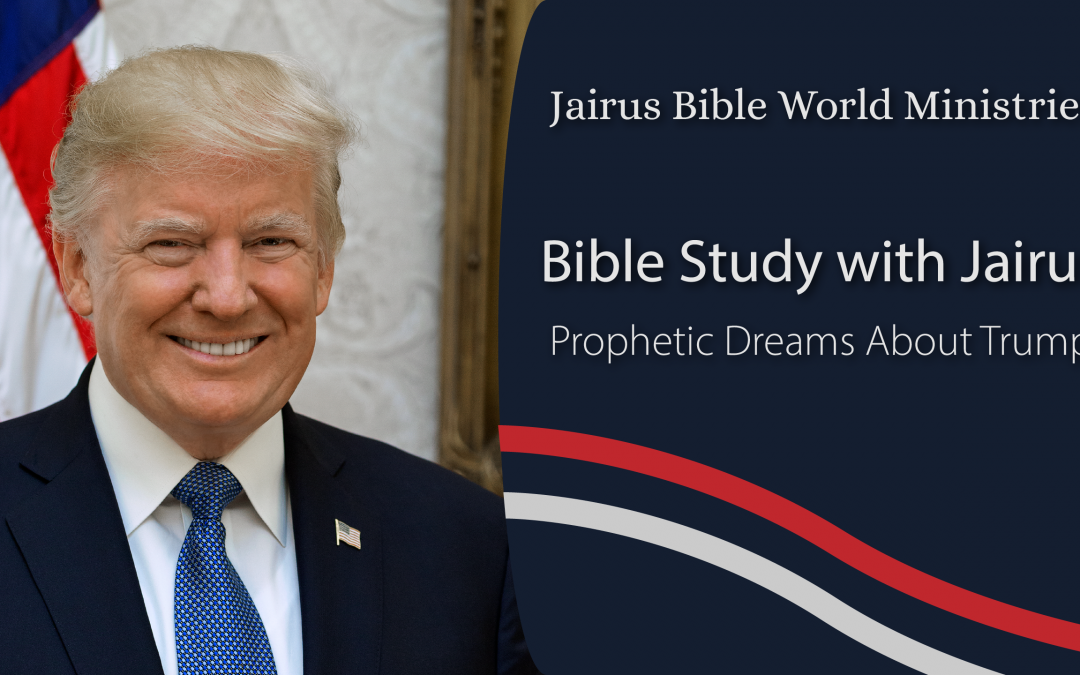 Many Christians who yearn for the return of the United States to its Christian foundations support Donald Trump as a president because they see that Trump acknowledges God and supports and agrees with certain Christian values and principles. However, disheartenment and disappointment swept across believers’ hearts when election results surfaced. I was also very surprised. Yet, some prophets hold to their conviction that God will supernaturally intervene in American politics to bring President Trump back into the White House. I have been following these prophets closely and I believe their words are from the Lord. One such prophet even mentioned that God is confirming these words by giving other believers across the world dreams and visions. I believe I am one of these people whom God is speaking to through dreams about Trump, and that is why I am still standing with the prophets who hold to this view.

In actuality, it’s not about Trump. It’s about God and the revival he wishes to bring to the earth. Nowadays, people are debating whether or not God has handed us over to the enemy because we haven’t prayed enough. Although this was sometimes the case for the Israelites in the Old Testament, I don’t think it applies to our situation today. Through my own prophetic dreams, I have discerned that our current situation in America is instead heavily tied to the spiritual state of America, and God’s plan for it and the world. I believe Trump is only the tip of an iceberg of change. If he were in office, we would have an administration that promotes the Gospel. An administration that does the opposite is comparable to a train going in the wrong direction. Either way, the problem does not lie in the politics of it all. It’s that one kind of leadership is aimed at stopping the global revival that God is planning to release on this earth, and the other is willing to go along with it. I believe this is why the enemy fought so much to stop Trump’s re-election.

It is not just about Trump.

There is a decisive battle at play between Christian freedom in America and the future of America and the world. God has shown me many visions of a great revival that will come to the United States, China, and the Middle East. In a strange dream, God took me to Trump’s office, and I felt God’s presence abiding there. I discerned that this was God’s sign of approval that Trump was His chosen one for this season. I am convinced that the re-election of President Trump will be a divine intervention to prepare the international political environment for a future revival.

The morning after election results were released, I had a dream. I dreamt about a person fishing. I saw a mysterious person holding a fishing rod, but I couldn’t see who he was. A fish had already been hooked, but the person holding the fishing rod was sliding the fish. A child in front of him held the line to help slide the fish. Fish-sliding is a common method in fishing. After a fish is hooked, the fish is not taken out of the water immediately. One first slides the fish so that the fish’s strength gradually diminishes. Only then does the fisher find a suitable opportunity to bring the fish up out of the water. If you bring the fish up immediately after it is hooked, the fish can easily unhook itself and swim away. The revelation I received from the Holy Spirit regarding this dream was, “Do not be anxious, the fish has already been hooked, but you should slide it for a while before you bring it up.”

I think this relates to the recent election between Biden and Trump. Many Christians prayed for Trump to be re-elected. When they discovered that Trump had failed to win, they began to wonder whether or not it was really God’s will to re-elect Trump. Some believers even started to criticize certain prophets for making false prophecies and many prophets apologized for making such “false prophecies.” However, other prophets and Christians did not revoke their prophecies. They look forward to the time when God miraculously intervenes and brings Trump back to the White House.

Recently, I was listening to a program on the Victory Channel called Flash Point. The host interviewed Pastor Bill Johnson and his wife Beni. Beni mentioned that when she prayed and sought God about the election, God told her to wait. Beni and Kat Kerr both believe this battle is not over. Kerr even said that God took her to the future where she saw that Trump had eventually won and God’s chosen people went out to the streets to cheer. She also said that God told her to eat cake and celebrate this victory.

When Trump was in the White House, many people were against him and betrayed him. Many things did not go smoothly for him. Although God raised up Trump to help Christians and America return to faith in God, Trump could not and cannot solve all our problems. Let’s consider his re-election: if Trump is successfully re-elected and if the leftists still make things difficult for him, how much will he be able to do in the next four years? Or, if Trump is successfully re-elected and the Church is not revived after four years, won’t those on the left side continue to oppose God? Won’t they get stronger?

Unfortunately, Trump cannot be president another four years after that, so who can American Christians rely on? We must turn to God. Trump was and is simply a judge for a time. Just as God raised leaders in the Old Testament, Trump was raised up by God to free God’s chosen people from control and turn their face back to the Lord. We should certainly thank God for raising up the judges because God used them mightily to save the Israelites and bring justice. But let us not forget the fundamental reason why the Israelites were handed over to the enemy. It was because they turned away from God and worshipped idols.

In some dreams, the Holy Spirit invites me to participate in spiritual warfare. From the evening of March 14 until the morning of March 15, I remained in a spiritual battle. First, I was fighting with a spirit who declared himself as a political spirit. Then I rode in a strange-looking war vehicle to fight with other enemies. This special war vehicle was like an army tank. As we rode, I fired toward the enemy. The unique part of the dream is that I was not fighting alone. I was fighting along with other tanks as an army. The tank I rode in was moving very fast and it went across different terrains such as ones with rivers and rocks. The spiritual warfare that night was very fierce. A great battle had been fought in the spiritual realm. After this dream, I heard testimonies from other prophetic people that they had difficulty sleeping that night.

On the morning of March 29, 2021, I had the following dream about Trump. In the dream, I was sitting on a broad hill watching a movie. I sat below the hill facing the higher part of the hill. The movie’s name was “Donald J Trump Jr.” I noticed the suffix “Jr.” at the end of his name, but I did not know what it meant. What trigged my interest most was that the star of the movie was an African American boy. I did not see President Trump in the movie nor the boy, but I was told the movie featured this boy. Suddenly, I saw an airplane in the shape of a hummer car fly over the space where I had been sitting. Instead of watching the movie, I entered it. In the skies, I saw many eyes looking here and there. They appeared to be the eyes of a band of angelic armies and while they searched and watched, I did not see any battles take place. I discerned the battle was won. Then I realized it was a movie.

God often speaks to me like this in my dreams. First, I see a movie playing on a screen and then I will enter the movie for some time. Afterward, I will come out and return to seeing it playing on a screen. Sometimes the dream language is personal in that God speaks to me using language I am familiar with. Some messages are like word plays from the Holy Spirit.

For example, in Chinese, the words “black horse” refer to something out of the blue, or unexpected or sudden. Also, the vehicle brand “Hummer” translates to “strong horse.” I felt by combing the African American kid with the hummer- shaped airplane and the movie title, “Donald J. Trump Jr.,” God was meaning to show that something unexpected regarding Donald Trump is about to happen. This may happen suddenly like a black horse. I think the word “Jr.” from the movie title is not referring Trump’s son but instead means “second.” I feel it means that Trump will appear to the public a “second” time.

What stood out to me the most in this dream were the searching eyes and the revelation that the star of the movie was an African American boy. I felt the eyes may have represented angelic armies that accompanied the airplane. I got the feeling that Trump was inside the plane, but I did not see him. Nonetheless, I feel there is a protection from a heavenly army  upon President Trump when he returns. The eyes could also be representative of God searching for hearts who still believe for Trump’s return.

It’s possible an African American boy plays the important role in Trump’s movie because of the role Donald Trump plays in supporting the black community. Trump is sometimes portrayed by the media as a racist; however, some African Americans have vocalized their support of Trump because of his proactive work among their community and race like helping with prison reform. Perhaps God will turn the heart of the African American community toward Trump when he returns to the White House just as God turned the hearts of the ten tribes of Israel to David, even afterward anointing him to be King over all of Israel.

Two final things I’d like to share is the sensation I had during the dream, and the airplane. When the airplane rose over the hill, it came with great force. Airplanes can represent ministries, or they may symbolize the rising of the Church. Lastly, I felt joy and celebration. As Kat Kerr said, we will celebrate greatly when Trump returns. Perhaps one day we may see an African American man act as the star of a movie called “Donald J. Trump Jr.” or “The return of Donald J. Trump.” Whatever God’s purposes are, I pray that they will be brought forth. Let it be as we stand believing for this prophecy of Trump’s re-election to come to pass. May God have His way as we await the sudden return of Donald J. Trump again.