Revival is coming to China (version 2) 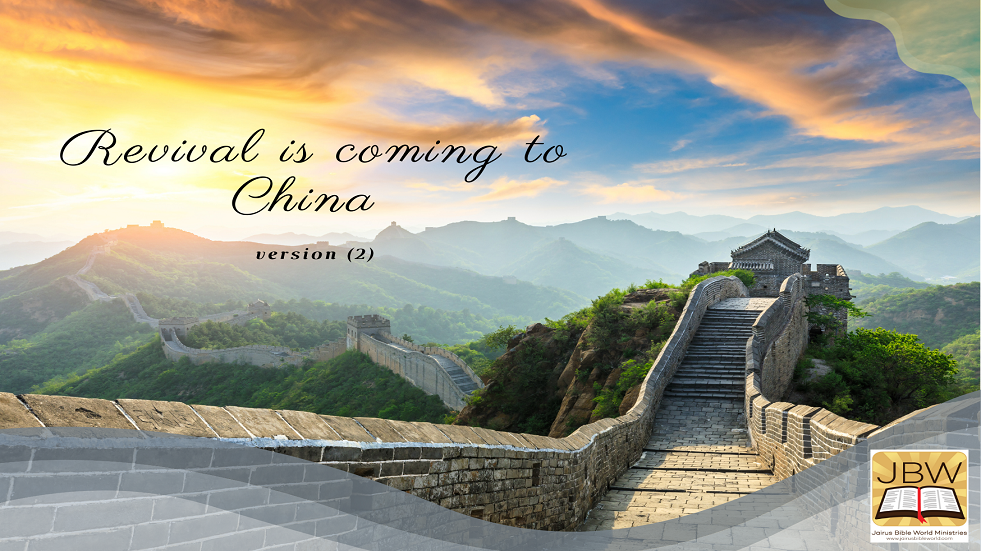 Revival is Coming to China

A Message for the Body of Christ

By 2015, I had been in the United States for 13 years and a Christian for the same amount of time. In 2006, I married my wife, and like many other Chinese couples, we had every intention of building a family. However, by 2015 we approached 10 years of barrenness. We wanted a child, but we simply could not have one. In search of healing for my wife’s infertility, I traveled to many cities within the US to join healing and prophetic conferences.

A final visit to an Elijah List conference in Oregon in January 2016 sealed the deal for me. There, a well-known prophet named Dutch Sheets spoke to the crowd and said, “Today, you come here not by coincidence. It is God who leads you here and from today on, you will hear God speaking to you like you never have before.” I believed these words. During our lunch break, I wandered to a nearby store and entreated of the Lord to speak to me. When I sat down in a chair outside of a Christian bookstore, my eye caught a Peanuts calendar sitting on display. The cover said, “Peanuts 2016 Family Planner.” Suddenly, God spoke clearly to me: “2016, plan your family; you will have a child this year.” I was astonished! I had never heard God speaking to me so clearly, and He just said I was going to have a child that year! I immediately called my wife and she encouraged me to buy the calendar as a memorial.

Meanwhile, I went back to China to visit my family in February 2016. My mother, who still worshiped Buddha, had been desperately praying to all kinds of idols to help us have a baby. I had been trying to preach the Gospel to her since 2003 but with trivial effect. Months later back in the USA, we continued waiting for our miracle. One day in desperation, I prayed, “Dear Holy Spirit, those people in Pentecostal churches always teach that we should have an intimate relationship with you. Now, I have prayed to both the Father and Jesus many times and I do not know when this [pregnancy] is going to happen. Can you ask the Father and Jesus for me when this will happen?”

That night I had a dream. A woman (representative of the Holy Spirit) pointed to the back of a male figure (Jesus). She said to me, “Did He not tell you that you will have a child next month?” I woke up the next morning and told my wife about this dream. A misunderstanding occurred between us and we ended up in quarrel that left us on non-speaking terms for two weeks until I received a text from her one day that read, “You have won the lottery!” We reconciled when she found out she was miraculously pregnant on May 28, 2016. Our miracle baby girl, Elim, was born healthy and beautiful in early 2017. My parents were astonished with this miracle and they both accepted Jesus as their Savior.

A Revival Among the Chinese

Before attending the Elijah List conference in 2016, I read a book by one of the speakers, Chuck Pierce. In his book, “God’s Unfolding Battle Plan,” Pierce recalls a visitation he had with the Lord in the 1980s. God told him what China would be like in 2006 and that there would be a great revival coming to China in the future. It would also spread to the world. I was just going to the conference to receive healing for my wife, but God had much more in store! That day I received three things: (1) a prophetic promise directly from God that I would have a baby (which came true); (2) an anointing to clearly hear God henceforth (which started that day and has continued); and (3) the beginnings of my commission to be part of this soon-coming revival to China.

When I came home from the conference, the Lord began to speak with me more about this revival. One day I was walking the streets of Washington D.C. thinking about this great revival. Suddenly, the Holy Spirit asked me, “What is a great revival?” I was surprised that I again heard him speak so clearly! I immediately replied in my spirit, “I heard that one out of 10 Chinese people have converted to Christianity. Isn’t this already a great revival?” Immediately, the Holy Spirit asked another question, “How about two out of ten?” I was shocked again by the clarity with which the Holy Spirit spoke. In a very short time, I had a calculation. That would be the equivalent of another 100 million Chinese people.

At that moment, I believe the Holy Spirit intended to challenge me with his questions to open my perspective. Please note that I do not think He only meant that two out of ten Chinese people will be saved. Bob Jones once prophesied that one billion souls would be harvested in the soon-coming world revival. For me, it is not hard to imagine that at least 100 million Chinese would be included in this number.

Sometime later, I met a Korean prophet who confirmed what the Holy Spirit spoke to me on that day. He said, “God will have you go back to China to teach the Word of God all over and be part of this revival.” He also said that the 21st century is a century that God will use to evangelize China.

On January 11, 2016, shortly after coming back from the Elijah List conference, I had the following dream. There are four scenes. In the first scene, I found myself at a construction site in China. A keeper (a guard-like man) was there with a roll/register in his hand. I got the impression that he was an angel who managed the Book of Life. I asked this man if a relative who had gone missing in China was on this list of names. After looking, he replied, “No.” I felt so sorry for this relative. In the second scene, I experienced great chaos and upheaval. I was tossed upside down and I discerned pending destruction as I watched a steel stick from the construction site fall from a building. By the end of this scene, I saw a building only partly constructed.

In the third scene, my wife and I were in a high glass tower with windows like the ones you see in big cities. It seemed we were a having a Christian meeting there when suddenly we received a report that we were surrounded by persecutors. Arguments arose among the people in the building. Some insisted to go down and some said to go up. I insisted on heading upward, so up we went.

In the fourth scene, my wife and I miraculously escaped into a residential building. I told my wife that no one would see us since we appeared just like the residents. As we walked downstairs, I felt peace and a lion-like animal the size of a cat appeared among us. I carried the animal and it seemed calm and meek until we hit a great wall that we could not pass through. Suddenly, the small lion-type animal arose with great strength to help us roll the wall over. Immediately, I saw several horses gallop speedily and powerfully, and a great pasture lay before my eyes. It was powerful! It reminded me of something resembling a great breakthrough or an extreme revival.

My interpretation coupled with the interpretation of a fellow believer is detailed below. This dream represents several stages of the coming revival. First, the construction site represents a work in progress. An incomplete or half-erected building symbolizes that a work has begun but is not complete. The angelic being keeping track of lives demonstrates God’s involvement and desire. It shows their salvation is important to God. My attempt to find a dead person can represent the spiritual state of many people in China, and my sadness shows God’s feelings regarding this matter. The sudden and great chaos in the beginning and throughout is representative of the shaking that will take place. Authorities and systems that have been allowed to stand for a time will fall, and only what is in line with God’s Kingdom will remain (a building left partly standing). The church will also go through immense suffering and during this test, some may fall.

The third scene is symbolic of a few things. God will give favor to those who are spreading the Gospel and discipling people in China. This is representative of the high tower my wife and I were hosting a Bible study in. Although persecution will arise and has even already, God has given his people the wisdom to see it coming (the glass windows). Wisdom for escape and a battle plan will be granted to those led by the Spirit and commissioned by him. In the dream, wisdom is represented by my ability to discern among those panicking and unsure, that our escape from the building will be by climbing upward instead of down. Climbing upward is also significant of looking heavenward to maintain our eyes fixed on the Lord and tuned into His plans. Persecution and shaking naturally entices us to look at our surrounding and environment; we are tempted to descend instead of ascending. To deal with the situation, faith must move Christians rather than fear. The only way to guarantee supernatural delivery is to continue upwards and the Lord will surely rescue such people.

God will also grant cover when necessary. This is demonstrated by us blending in and appearing like the other residents. Finally, the lion-like animal represents the presence of the Spirit of Christ which will accompany those he calls His own. He will grant them peace amidst the turmoil, and they shall not be afraid. Carrying the lion-like animal is also symbolic of being equipped with the Spirit of Christ. This scene represents both the life of Christ in us and the help he offers. Christ is both meek and mighty. If a wall stands in our way, Christ will arise with power and strength to make a path for our feet by rolling the wall away.

With Christ, Christians commissioned by him will demolish forces in our path to make it possible for breakthrough to be released (represented by the horses and pasture). As speedily and powerfully as the horses were, so will the awakening be. It will also be pleasant (green pasture).

Finally, in March 2020, I was taken into another vision. This was the most vivid 3D type of vision I have had thus far. In it, I saw a great revival happening in China. It was bursting out all over! People were dancing, celebrating, and worshiping God all over the streets of China. In the next scene, I was brought into a heavenly meeting where many saints in glory, including Chinese and Westerners, were meeting. There was a Chinese lady who gave me a tour of the place and she specifically told me that this revival is something she had never seen when she was on earth. In the end, angels had bound an evil political spirit and I saw that a great political change will come to China after this great revival. China will become a democratic nation and they will worship God.

Just as the Lord once appeared to me in great power and light and laid his hand on me, I sense His hand is on China right now. He is about to release a great awakening to China and a mass exodus of Chinese people will come out of darkness into the light.